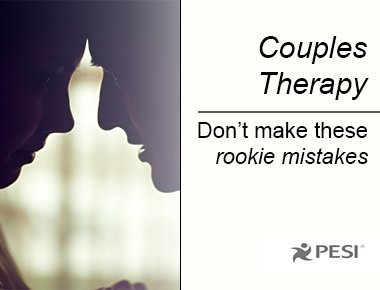 Why is couples therapy a uniquely difficult form of practice? For starters, there’s an ever-present risk of winning one spouse’s allegiance at the expense of the other spouse’s. Couples sessions can be a scene of rapid escalation uncommon in individual therapy, and even more unnerving is the fact that couples therapy often begins with the threat that the couple will split up.

If couples therapy were a sport, it would resemble wrestling, not baseball. It can be over in a flash if you don’t have your wits about you. As in any sport, there are beginners’ mistakes. Here are a few of them:

When an inexperienced couples therapist provides too little structure for the session, they watch and observe as spouses speak for each other and read each other’s minds. Sessions generate a lot of energetic conversation, but little learning or change.

Sometimes a therapist who doesn't create a clear structure for the sessions will conclude that some clients aren't good candidates for couples therapy because they’re too reactive in each other’s presence. The upshot is a referral, splitting up the partners for individual therapy, which might further erode the marriage.

Mistake #2 – No Plan for Change

Many therapists don’t recommend changes in the couple’s day-to-day relationship. Some therapists act as if insight alone is enough to help couples change intractable patterns of thinking and acting. We all know that certain dynamics within a relationship have a life of their own. All empirically supported forms of couples therapy require active interventions aimed at teaching couples new ways to interact. Most involve homework assignments.

Inexperienced therapists give up on relationships because they feel overwhelmed with the couple’s problems. Some therapists survive the early sessions but get frustrated later and actively advise couples to separate. When deciding that the couple isn't amendable to treatment, they don’t seem to factor in their own skill level. They may further reduce their own sense of responsibility by making a delayed diagnosis that one of the spouses has a personality disorder. This often means nothing more than “I can’t work with this person.”

We need to cultivate wise couples therapists, not just competent ones. Wise therapists see the whole context of people’s lives and can reflect openly and deeply on values and broader social forces influencing the profession. Becoming a competent couples therapist is just the first step in becoming a good one.

We want to know!

Can you compete with William Doherty, Ph.D. and couples therapy expert, for the worst experience ever in a couples therapy session? Share your stories in the comments below.

Discover the key to couples therapy in The Neglected Craft of Couples Therapy: How to Manage Couples Sessions featuring William Doherty.
This post is based on an article originally brought to life by our partner, Psychotherapy Networker.