Joining Through the Truth: Therapeutic Coaching Tests Our Assumptions 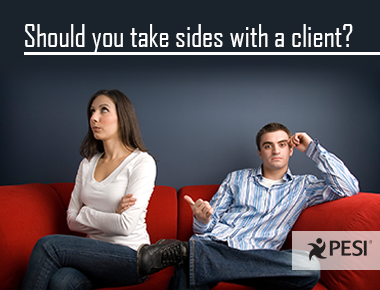 Most of us were trained to believe that we needed to be extremely careful when helping clients face the really difficult truths in their lives. Better to err on the side of going slow, creating safety, and remaining neutral than to come across as pushy or disrespectful. Nevertheless, my own experience as a couples therapist has taught me that we aren't doing clients a favor by soft-pedaling difficult issues. The approach I've developed, Relational Life Therapy (RLT), is based on the premise that it's disrespectful to clients not to let them in on the truth about what we witness regularly in our offices as they play out their relationships in front of us: the ways they deal with their partners are often self-centered, unfeeling, and counterproductive.

In some ways, the guiding principle of RLT is to be able to say to clients what we might otherwise say only to our colleagues in our supervision group. Instead of confiding, when they're out of earshot, something like, "I can't believe what a witch she is to him. He's such a Caspar Milquetoast," I believe that's what you need to say--skillfully and respectfully--in the session with the couple.

Some would call this approach confrontational, but I think that term is misleadingly adversarial and addresses only half the process. I think the quality of directness I'm talking about is better described as joining through the truth. There are two parts to this approach: the first is to hold a mirror up to our clients to help them see themselves and their role in the dysfunctional dance of their relationship as accurately and fully as possible; the second, which is where the real nuance and clinical skill comes in, is to show them the difficult truths about themselves in a way that leaves them feeling not only that we're on their side, but that we're actually rooting for them.

RLT is an approach that stands somewhere between traditional psychotherapy, with its emphasis on creating a nonjudgmental, accepting, holding environment to bring about change, and the more rough-and-tumble, challenging, psychoeducational discipline of life coaching. For want of a better term, I’d call it therapeutic coaching. It's based on the idea that we can coach clients toward intimacy, teach them how to be more psychologically evolved, and mentor them into transforming their characters.

I don't believe that partners share 50-50 responsibility for all their issues with each other. Some couples issues are 70-30, some 90-10. One partner can have an untreated bipolar disorder or be an alcoholic rager, while the spouse's major "contribution" is simply being there. An RLT therapist has no problem saying something like, "OK, Mr. Jones, you're a nut. And Mrs. Jones, you're an even bigger nut. Here's why. . . ."

Not always, but often, a couple presents as one "latent" and one "blatant." There's one who's in an enabling position, albeit perhaps angrily so, and another who's more clearly and egregiously antirelational. If you're sitting with a couple and thinking to yourself, "Yeah, I couldn't be married to that person either!" you're thinking about the blatant partner. The truth is that, many times, one partner (the fed-up latent) drags into therapy the other partner (the often clueless blatant) because the blatant is relationally insufferable--either withdrawn and giving too little, or abrasive and taking liberties.

Another way of saying that someone is blatant is that they stride through life feeling superior, looking down their nose at others, or ignoring the rules and feeling entitled. Grandiose clients bring to therapy the same privilege they bring into their living room and bedrooms--the privilege to blow up or flee. Encountering the threat of such volatility, we're taught to go gingerly. Under the rubric of "forming an alliance," or "gaining the client's trust," we learn, in essence, to replicate the traditional spousal role: we reason, we cajole, we seduce--we do everything except tell the truth and put our foot down.

As a result, most therapists get about as far with grandiose clients as traditional wives get with stubbornly entitled husbands. Therapists fear that if they push too hard, the client will explode or leave treatment--not unreasonable fears--so we play tough clients like fish, alternating between giving them enough line and reeling them in. Therapeutic coaching deals with this issue a little differently. It begins by removing the power of intimidation. Before I reach for an alliance with a difficult client, I know that I first must gather leverage if I'm to have any hope of bringing about positive change.

Leverage means that therapy must offer the grandiose client either the prospect of something he wants--a warmer, sexier wife, for example--or a buffer against negative consequences he distinctly doesn't want--like losing his marriage. This is a necessary first step with entitled clients because grandiosity impairs one's sensitivity to others and ability to assess negative consequences.

For more than 50 years, the mental health field has focused on helping people come up from the one-down position of shame. But we've done a poor job equipping therapists to help entitled clients come down from their one-up perch in life. Many current forms of couples therapy invite therapists to listen empathically, reflecting back what we hear, to be nondirective, to serve as a secure attachment figure, a safe holding environment. Such a nurture-based, facilitative therapy can work with a shame-based person because lack of empathy to oneself is central to the disorder. But the grandiose client has no problems being empathic toward himself. His missing trait is empathy toward others--and an appreciation of consequences.

In our society, intimacy is considered a feminine characteristic, and most men react to the prospect of intimacy with all the enthusiasm of sitting through a chick flick.

We do to relationships what we often do to things deemed feminine: we idealize it in principle and devalue it in fact. Yet we've never wanted more from our long-term relationships. Today, couples want long walks on the beach holding hands, heart-to-heart talks, and great sex into their fifties, sixties, and beyond. However, our culture is built for production and consumption--not romance.

If we're going to help people develop the skill set of knowing how to sustain connection, we need to know that struggle inside out from our own lives. We need to have mastered in our own intimate lives the same skills we ask our clients to use, and we need to be transparent about it. On the days my wife, Belinda, and I don't use our tools, I often tell the couples I see, "We look just as unhappy as you do." I believe in communicating to our clients that we're in the mud with them--more like 12-Step sponsors than paragons of traditional therapeutic wisdom.

Joining through the Truth

In RLT, as soon as we've gained the leverage that sets the stage for therapeutic change, we form the therapeutic alliance by telling clients the difficult truths right out of the starting gate.

Sometimes the struggle to confront difficult truths may not come in the present, but in the past, where a particular relationship stance was learned. Professional life coaches aren't trained to pursue family-of-origin or early childhood issues, but therapeutic coaches are. In contrast to current therapies, which focus on the traumatic influence of childhood experience, we stress identification and social learning. For example, we don't see grandiosity as always a defense against traumatic shame, but simply a legacy from childhood. We don't see tending to the wounded little person underneath the child's grandiose attitudes, beliefs, and behaviors as enough to make these personal characteristics simply fall away when such vulnerability surfaces. Grandiosity must be dealt with per se: as it was learned, so it must be unlearned.

From Therapy to Therapeutic Coaching

Some clinicians resonate easily with this way of working--being themselves, telling the truth as they see it, sharing experiences they've had in their own lives, being direct. In fact, they may say that they're already doing many of these things by the seat of their pants. For others, this way of working may make sense, but it requires an expressive style that's too foreign to their temperament or clinical belief system. More than adopting any particular methodology of change, therapeutic coaching is founded on the belief that we can be far more direct and challenging to the clients who come to us than we've previously acknowledged. I operate with the assumption that, by and large, people are neither fragile nor stupid. If you show them how they're getting in their own way and what behaving more skillfully looks like, they'll be grateful. Rather than the expectation that telling tough truths will send clients out of the room screaming, I've seen over and over that, if done with love, grace, skill, and even an occasional dose of real wisdom, therapeutic coaching brings clients back for more.

To be sure, the approach I'm describing requires therapists to move beyond their comfort zone and step out from behind a veneer of calm neutrality. But I believe that in order to teach our clients how to be authentic and connected, we must be real with them ourselves. If our work with troubled couples is to move to a new level of effectiveness, we need to consider how well our traditional assumptions about relationship, change, and our own roles are serving us and our clients. I've found that the couples I see are ready to meet the challenge of examining themselves, of becoming explorers in what is, for them, uncharted territory. The question for the field of psychotherapy is whether we're ready to meet that challenge ourselves.Terry Real, LICSW, is an Internationally Recognized Family Therapist, Speaker and Author. A family therapist and teacher for more than 25 years, Terry is the best-selling author of I Don’t Want to Talk About It: Overcoming the Secret Legacy of Male Depression (Scribner, 1997), the straight-talking How Can I Get Through to You? Reconnecting Men and Women (Scribner, 2002), and most recently The New Rules of Marriage: What You Need to Make Love Work (Random House). Terry knows how to lead couples on a step-by-step journey to greater intimacy – and greater personal fulfillment.
This post is based on an article originally brought to life by our partner, Psychotherapy Networker.

The full article, “Joining Through the Truth: Therapeutic Coaching Tests Our Assumptions,” written by Terry Real, LICSW, appeared in the Nov/Dec 2012 issue of Psychotherapy Networker magazine.