What Causes Depression and Anxiety? A Controversial Question.

This is an excerpt from Feeling Great by David D. Burns, MD 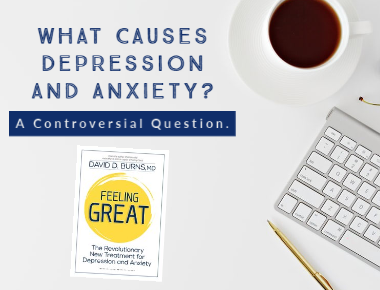 In the closing chapter of my new book, Feeling Great, I share my thoughts about a number of controversial topics. I won’t be able to give you the ultimate truth on each topic—I can only share my own best thinking with you based on my research training, clinical experience, and critical reading of the research literature.

So if you come to different conclusions on any of these topics and decide that I’m way off base, that’s totally okay! I’m not always right! In my book, I provide references so you can always check them out for more information.

Here are the questions I’ll focus on from this excerpt from Chapter 31 of Feeling Great:

1. Do depression and anxiety result from a chemical imbalance in the brain?

For more than fifty years, psychiatrists have promoted the idea that depression and anxiety result from a chemical imbalance in the brain, and this idea is still popular today. But is this theory valid?

We know that the billions of nerves in the brain use chemical messengers (called neurotransmitters), like serotonin, norepinephrine, dopamine, GABA, and many others, to send messages to each other. So when a nerve cell fires, it releases a chemical messenger, like serotonin, into the tiny synaptic gap that separates it from the next nerve cell in the network. The serotonin diffuses across the synaptic gap and attaches itself to receptors on the next nerve cell, causing it to fire.

It was a simple and appealing theory that spawned a multibillion-dollar drug industry since pharmaceutical companies could develop and market drugs that increased levels of serotonin or stimulated the serotonin receptors in the brain. These “antidepressant” drugs would presumably compensate for the “chemical imbalance” in the brain and cure the depression. Just take a pill and you’ll be happy!

Many people today still believe this theory, but is it true?

Toward the end of my psychiatric residency, I had a chance to test this theory. I did three years of basic research on the chemical imbalance theory during my postdoctoral fellowship at the University of Pennsylvania School of Medicine. I worked on the Depression Research Unit at the Veterans Hospital that was affiliated with Penn.

Just before I began working there, my colleagues had begun conducting an experiment with the depressed veterans on our research unit. Over a several week period, half of the veterans got daily milkshakes laced with massive amounts (20 grams) of L-tryptophan, whereas the other half did not. It was a “double-blind” experiment in that neither the patients nor the doctors knew which patients were receiving L-tryptophan and which were not.

What is L-tryptophan, and what was the goal of the study?

L-tryptophan is an essential amino acid that your body cannot manufacture. You have to get it in your diet. Certain foods, including eggs, poultry, and milk, contain significant amounts of L-tryptophan. Once L-tryptophan goes into your stomach, it crosses into the bloodstream and then diffuses into the brain, where it is converted into serotonin, the “happy chemical.” That means half of the veterans in our study were experiencing massive increases in brain serotonin whereas the other half were not.

Our hypothesis was simple. If a deficiency in brain serotonin causes depression, then patients who received massive daily doses of L-tryptophan should have experienced antidepressant effects.

Sadly, there were no antidepressant effects of L-tryptophan. We found absolutely no differences in depression between the two groups. In other words, the huge boost in brain serotonin did not relieve depression. We published this finding in the top psychiatry journal in 1975 and concluded there was no convincing evidence for the chemical imbalance theory. To this day, I am still not aware of any consistent or convincing evidence that depression, or any other psychiatric problem, results from any “chemical imbalance” in the brain.

A press release from the University of Colorado described amazing genetic studies involving up to 440,000 individuals. The investigators analyzed highly studied genes claimed to be involved in boosting susceptibility to depression over the past twenty-five years. The investigators concluded that all the previously published studies were incorrect and that the genes involved in the synthesis or regulation of neurotransmitters in the human brain are no more associated with depression than genes chosen at random.

This doesn’t mean there are no genetic causes of depression, just that the genes involved in the regulation of certain neurotransmitters in the brain are clearly not involved in susceptibility to depression. These incredible new findings underscore the conclusion that my colleagues and I reached in 1975: There is simply no convincing or consistent evidence for the chemical imbalance theory of depression.


2. What does cause depression?

If a chemical imbalance doesn’t cause depression, then what is the cause? I think the most honest answer is that we just don’t know.

There are lots of theories, including:

But in my opinion, none of these theories has much, if any, convincing experimental support either. It’s great to explore all hypotheses, but it’s equally important not to jump on a bandwagon simply because a certain theory sounds good. We just don’t have any solid research that has convincingly pinpointed the psychological, biochemical, or genetic causes of depression or anxiety.

One day, we will know a great deal more about the causes of emotional problems. For now, I am simply grateful that psychotherapy is evolving rapidly and that we have a number of promising new treatment techniques, including the ones I’ve described in Feeling Great.

Check out this ten minute video clip where I discuss these questions and more. And click here to order Feeling Great.


Get this revolutionary treatment for depression and anxiety... 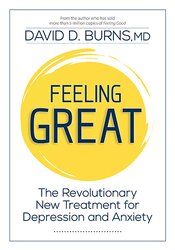 From the author who has sold more than 5 million copies of Feeling Good: The New Mood Therapy, comes a new and revolutionary high-speed treatment for depression and anxiety.

The Amazon best-seller Feeling Great is based on 40 years of research and more than 40,000 hours treating individuals with severe mood problems. The goal is not just a rapid and complete elimination of negative feelings, but the development of joy and enlightenment.

Order your copy today!
Meet the Expert:
David D. Burns, MD, is an emeritus adjunct clinical professor of psychiatry and behavioral sciences at the Stanford University School of Medicine. His best-selling books, Feeling Good and the Feeling Good Handbook, have sold over five million copies worldwide.

Although he was a pioneer in the development of cognitive behavior therapy (CBT), in the past 10 years he has created a more powerful approach called TEAM-CBT. Individuals who attend this workshop will be eligible for Level 1 TEAM certification by the Feeling Good Institute in Mt. View, California.

More than 50,000 therapists have attended his training programs over the past 35 years. His website, www.feelinggood.com, offers many free resources for therapists and clients alike, including his tremendously popular Feeling Good Podcasts which draw more than 50,000 downloads per month.