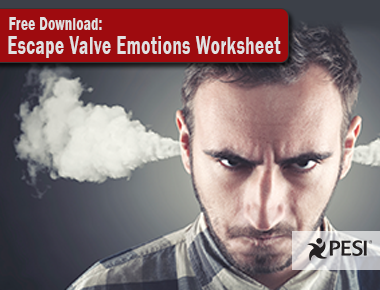 Working with individuals with personality disorders and other emotional/impulse control disorders often leads mental health professionals to find ways to help their clients manage extreme emotional reactions. These reactions are often fueled by underlying emotions that are difficult to deal with. The emotional reaction that is expressed is what we will call the “escape valve emotion."
Let's explore a scenario where the escape valve emotion is anger.
Anger is an easy emotion to express and is often a surface reaction to a more central or core emotion.
For example, Jessica meets criteria for Borderline Personality Disorder. Jessica has been asked to a friend’s birthday party, but she is not feeling up to it as she is prone to sadness and loneliness, which is how she is feeling on the day of the party. Her friend calls her and asks her to come, saying it would mean a lot to her, and “everyone will be there.” Jessica feels shame and guilt about feeling sad and lonely and not feeling up to going. Instead of talking directly to her friend, she ignores the first few texts and voicemail messages, but reads each one. This further exacerbates her dissonant and unacceptable emotions (in her view) of shame, guilt, sadness, and loneliness. The phone rings one more time, Jessica picks it up, and reacts in an angry and verbally hostile manner to her friend, “Who do you think you are? You’re always doing this to me! You expect me to entertain everyone and go to your fu--in party. I am tired of you and tired of your fake a-s friends” and hangs up the phone.
What Jessica has done is what a lot of individuals do when they encounter unacceptable/dissonant emotions along the borderline personality spectrum or other emotional/impulse control disorder spectrum. Instead of managing these emotions, they let them build up and fester and eventually come to the point that a pressure valve must be released, and often that pressure valve emotion is anger; a much easier emotion to express and it allows the pressure to escape, so it is self-reinforcing.
The Escape Valve Emotions Worksheet is designed to help your client(s) identify those unacceptable/dissonant emotions that build inside until they release their pressure valve (more acceptable/suitable) emotion, like Jessica in our example. This worksheet can be given to your client(s) to complete on their own or in session. The purpose is to increase awareness into the driving emotions of maladaptive reactions your client(s) are experiencing, or to the individual in a relationship with a reactive individual. Increasing awareness of underlying issues increases the probability of mastering reactions and self-control.
Download: Escape Valve Emotions Worksheet
Daniel J. Fox, Ph.D., has been treating and specializing in the treatment and assessment of individuals with personality disorders for the last 14 years in the state and federal prison system, universities, and in private practice. Learn more by visiting his website.