Plus, 3 Tips to talk to your clients about the new series. 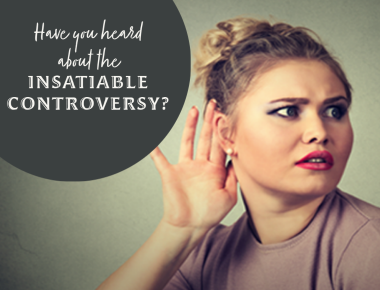 If you haven’t already heard about it, there’s been a lot of outcry from mental health/health professionals, parents, people who have experienced eating disorders, and the size acceptance community about the trailer from the new Netflix series, Insatiable. At last count, the petition started through Change.org to protest the series was at 214,000 signatures, and it continues to grow.

The story line is about a high school girl who is fat and miserable. She is uncomfortable in her body, bullied at school and bingeing at home. But all that changes when she’s punched in the face and has to have her mouth wired shut over her summer vacation. The result? She loses weight and becomes conventionally beautiful. The plan? With her newfound power she will get revenge on those who fat shamed her.

Here are three concerning messages the series sends that you should be aware of to start conversations with your clients and teens:


Insatiable plays on the stereotype that higher weight people are always miserable and always overeating or bingeing – their appetite is insatiable. It implies that it’s impossible to feel good in your body if you’re not thin and reinforces the shame so many adolescents already feel about their bodies.

Reinforcing this depiction makes higher weight kids and teens vulnerable to more teasing and fat shaming, which is the most common form of bullying at school. Insatiable gives a nod to the bullies that fat shaming is normative behavior.

Binge eating disorder is a real diagnosis that affects people of all sizes. It’s important to remember that there are higher weight teens who don’t binge and average weight teens that do – you can’t make assumptions about eating behaviors based on body size. There are ways to help people of all sizes make peace with food, regardless of whether their weight changes.

We need to have scripts that show fat people who feel good in their bodies and who have a healthy relationship with food.


The main character loses weight because she literally cannot eat once her jaw is wired shut. In a culture that prizes thinness over just about anything else, the message here is do whatever it takes. We know that teens engage in all sorts of unhealthy practices to lose weight, and that adolescents who diet are at much greater risk of developing an eating disorder including Anorexia, Bulimia and Binge Eating Disorder.

Bodies come in all shapes and sizes. When people diet for weight loss, upwards of 95% will gain back the weight and one-third to two-third will end up higher than their pre-diet weight. Yo-yo dieting leads to higher set points over time as the body gets better at storing fat. The weight loss in Insatiable gives an unrealistic picture of what’s possible and healthy. Implicitly encouraging young people about the value of intentional weight loss is irresponsible at best and life threatening at worst.

We need to have scripts that show fat people engaged in activities other than pursuing weight loss including situations involving dating, family, friends, school, career and finding their passion.


Only when the main character meets society’s standards for an acceptable body does she become empowered to fight against all of the terrible fat shaming.

Yes, it’s a good idea to name fat shaming as unacceptable, but using the stereotypes that feed the problem is not the way to go about it. While many fat people have internalized the weight stigma rampant in our culture, there are also those using their voices to challenge this cultural bias.

We need to have scripts that show fat people empowered – without losing weight.

As of now, the show will proceed as planned, premiering on August 10th. There are claims from Netflix that the public needs to wait and see the show because we’re misinterpreting the message. They’ve put an embargo on critics who have seen previews of Insatiable.

No matter the intent, the way the show is framed through the trailer already does damage. So, I’ll wait and see. But I won’t be holding my breath.

Judith Matz is a clinical social worker and co-author of two books on the topics of eating and weight struggles. Beyond a Shadow of a Diet: The Comprehensive Guide to Treating Binge Eating Disorder, Compulsive Eating and Emotional Overeating has been called “the new bible” on this topic for professionals. The Diet Survivor’s Handbook: 60 Lessons in Eating, Acceptance and Self-Care was a #1 bestseller on Amazon and a favorite resource for therapists to use with clients. She is also the author of Amanda’s Big Dream, a children’s book that helps kids to pursue their dreams – at any size!

Want to discover your own attitudes toward dieting, food, and body size? Click here to get instant access to this FREE 1-hour online CE seminar designed for clinicians, health professionals, educators and parents like you to learn strategies to help you assess — and transform — your internalized views about weight and dieting.

If you’d like to read the letter I sent to the content decision makers at Netflix, see below:

I am writing to you as a clinical social worker, author, and national speaker who has specialized in eating and weight concerns over the past 30 years. I spend much of my professional time teaching about weight stigma, shame, and diet culture, and I was both surprised and saddened to see the trailer for Insatiable.

This show will hurt people already at war with their bodies, including children and adolescents who are especially vulnerable to messages about weight and self-worth. The title plays on the stereotype that all higher weight people are out of control with food, which is an inaccurate message. You suggest that it’s not possible to feel good in a fat body and that losing weight is the only way to become empowered. You have an actor wearing a fat suit despite the fact that there are many talented fat actors who can – and should – be given the opportunity to play roles for higher weight people. We’ve recently witnessed the backlash from Scarlett Johansson planning to play a transgender character from which she ultimately withdrew.

You will also give more ammunition to the bullies out there. While it’s great that so much attention is given these days to social justice concerns about diversity and inclusion, natural body size variation is almost always left of out the discussion. According to Rebecca Puhl of the Rudd Center, weight based bullying is the most common form of teasing and bullying in schools compared to race, ethnicity, sexual preference, physical disability and religion. Adverse outcomes include low self-esteem, depression, suicidal ideation, poor body image, and maladaptive eating behaviors. (Journal of School Health, 2011). We also know that teens who diet are at much higher risk for eating disorders including Anorexia, Bulimia, and Binge Eating Disorder.

I will be using my platforms to call out Insatiable as a prime example of all of the mistakes the media can make as I continue to educate people about diet culture and weight stigma. Perhaps you’ll be glad that this show stirs up controversy as a way to get more publicity, but you’ll do a great deal of harm along the way.

There are all kinds of wonderful scripts waiting to be written that could actually empower fat people (you should be aware that the term “fat” has been reclaimed by many in the size community, just as the word “queer” has been reclaimed.) Shows like Queer Eye have been both very successful with viewers and have humanized people from marginalized groups. I would be happy to consult with you on future projects based on my expertise and as an ally to the fat community. I can also recommend many talented higher weight people who can speak to the experience of being fat in a fatphobic culture with stories of pain, resiliency, and empowerment. It’s time for Netflix to scrap storylines that fat shame and replace them with shows that truly stand out as cutting edge.

You can do better.

Judith Matz, LCSW
www.judithmatz.com
Co-author of Beyond a Shadow of a Diet and The Diet Survivor's Handbook
Author of Amanda's Big Dream