Are you practicing CBT to the best of your ability? 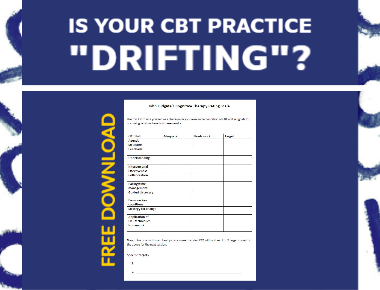 It’s been shown that therapists using CBT tend to “drift away” from the CBT they were trained in and practiced initially.

One could say that, over time in practice, therapists become more confident in their skills and how to apply them… But research shows they may actually be practicing the therapy with less fidelity to the model overall.

It might be that they take short cuts and/or neglect important aspects of what has been shown to be effective components of the approach.

For example, therapists practicing CBT initially may diligently set an agenda for each session and assign homework very systematically and collaboratively. Ten years later in their CBT practice, they may be doing less of both.

Similarly, therapists who have seen a client for a significant time (a year or longer) may “neglect” some aspects of practice which were apparent in the early sessions. For example, the therapist is now more directive and less collaborative.

We as therapists (myself included) are all prone to this. What is most important is being aware of when it is happening and taking steps to correct it.

Here are a few simple ways to prevent this “drift” so you can continue to practice the best version of CBT for your clients.


With this in mind, I developed the following short checklist of CBT skills, based on the Cognitive Therapy Rating Scale (a measure of therapist competency, which I demonstrate in my intensive CBT training programs).

CBT Therapists are advised to use the list and rate themselves as a check-in on their own implementation of CBT, and set goals for themselves for upcoming sessions in the light of this. Trainees and therapist in CBT supervision I have worked with have found this a very useful tool. 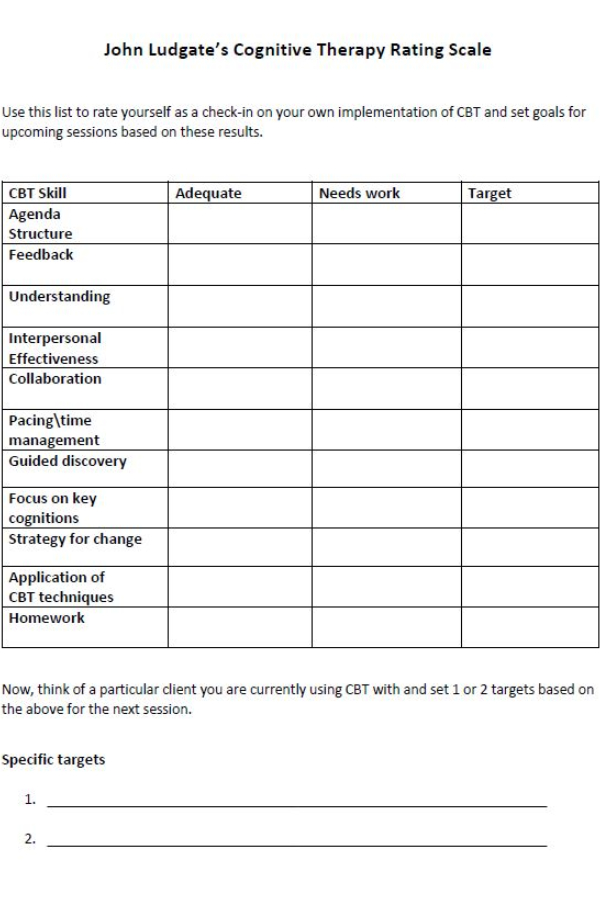 Don’t miss out on this FREE printable resource you can use in your very next session. 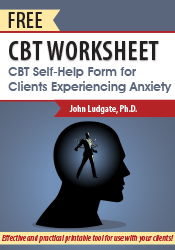 Clinicians like you are always seeking out the most effective strategies and techniques to help clients overcome their anxious suffering and find joy in their lives...

Don’t miss this opportunity to gain effective CBT methods and strategies for both children and adults that you can apply in your next session — plus earn free CE and get a valuable worksheet! 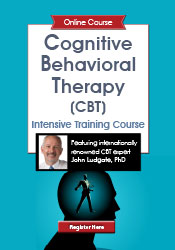 Master the skills and competencies of CBT in this intensive online training course, featuring internationally recognized CBT expert Dr. John Ludgate. The training will prepare you to apply this powerful modality with a wide variety of clinical populations. Transform treatment outcomes—and your practice!
Reserve my seat!
Meet the Expert:
John Ludgate, Ph.D., is a licensed clinical psychologist who has worked as a psychotherapist for almost 30 years. He is a Founding Fellow of the Academy of Cognitive Therapy. His practice, which involves work in both a private practice and in an outpatient psychiatric center, consists largely of treating clients referred with mood problems and/or anxiety conditions. He is currently working at the Cognitive-Behavioral Therapy Center of Western North Carolina in Asheville, North Carolina.

In the early 1990’s, Dr. Ludgate was a research clinical psychologist at the University of Oxford in England and served as cognitive therapist in several outcome studies of panic disorder, agoraphobia, social phobia and hypochondriasis. He authored Cognitive Behavioral Therapy and Relapse Prevention for Depression and Anxiety (Professional Resources Press, 2009) and was co-editor with Wright, Thase and Beck of Cognitive Therapy with Inpatients: Developing a Cognitive Milieu (Guilford Press, 1993). His other books include Overcoming Compassion Fatigue (PESI, 2014 co-authored with Martha Teater and The CBT Couples Toolbox (PESI, 2018). He has written numerous journal articles and book chapters in the field of Cognitive Behavior Therapy for Anxiety and Depression. He has presented many seminars and workshops on cognitive behavioral approaches, both nationally and internationally.

Learn more about his educational products, including upcoming live seminars, by clicking here.