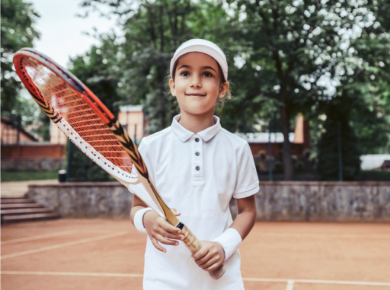 We’ve had some pretty historic moments happen recently, with top athletes like Simone Biles and Naomi Osaka coming forward to say that their physical and mental health have to be first and foremost in their lives. This has set a precedent for not only athletes, but for young kids who are watching these events unfold.

How do we talk to our kids and young clients about what’s happening in the 2020 Olympics?

Being able to talk about putting your own mental health first is something that in our society has been really dismissed.

When we talk to kids about what’s happening, it’s important that we’re framing this as a positive experience. We’ve had some prominent people in the media disparage some athletes for speaking out and taking a stand. That really sends a damaging message to our young kids.

So often, elite athletes are taught both implicitly and explicitly that their body is a commodity. As a therapist working for the last two decades in the field of mental health, I’ve worked with a few former athletes. Once they’re out of the competitive world, they so often struggle with significant mental health issues as well as a crisis of identity. They don’t know who they are anymore.

As parents, we should praise kids for their accomplishments and achievements, because they did work really hard. But we should also start and work towards praising the things that matter the very most, as this is something that will last their whole lifetime. Then once their athletic career is over, they haven’t lost sight of who they are.

We can praise young athletes for working hard, for not giving up, and for listening to their body and taking a break when they need it. This is something we as clinicians can help parents learn how to do if they’re not doing it already.

We can also help instill in our young clients that it’s so important to be listening to their internal compass and recognizing how to listen to their own body. What bodily cues will tell them something is too much? Who are their support people that they can go to for help? And what should they do when they don’t feel confident in themselves?

Next Steps For Clinicians, Parents, Coaches, and Mentors

First, we need to think about how we talk about boundaries – more specifically, setting healthy boundaries. High profile female athletes have done this, and it’s been so empowering not just for them, but for women worldwide.

Helping young athletes establish body autonomy and instilling in them that their body belongs to them is something that is critical. As we’ve seen devastating cases of sexual abuse, I think our athletes are often taught that their body doesn’t belong to them, that their body should be high powered all the time, and that their body is a commodity. And we know that nothing could be farther from the truth.

We can help teach our young kids and athletes right from the beginning that no matter what, their body belongs to them. Nobody should be touching their body inappropriately. Helping them understand what an inappropriate touch is from a young age is so important.

Understanding what “bad touch” is and who are safe people to go to is critical. And this has been one of the challenges that we’ve seen, especially in these high-profile cases, because the people that these professional athletes are supposed to trust the most have been the ones who have caused the most harm.

There is a story that came out recently about a former Olympic athlete who disclosed that she competed with a broken foot. Her coach and doctor had not been honest about the extent of her injuries, and she felt forced into competing because she didn’t know she had a choice. She’d never been taught that she had a choice.

And I think that this is something that’s so important: teaching kids and our young athletes how to listen to their bodies, and that it’s okay to set boundaries.

I think one of the bravest things that has happened in this Olympics is Simone Biles stepping back and saying, “I’m not in a place physically and mentally to compete right now.” In having so much media attention on that, I can’t imagine the stress and anxiety that has caused her.

But in doing this, she’s lifted up not only her teammates, but this whole generation of little boys and girls watching her. We’re seeing people begin to speak out loud about the things that have been unspoken in sports for so long. It’s okay to have stress. It’s okay to have anxiety. It’s okay to not compete if you aren’t physically up for it. It’s okay to step back and say, “I need a break for this.”

These are brave things that have gone undone for too long, and we haven’t talked about the toll of mental health on our athletes…as well as on our little ones who are watching these athletes.

Some of the most important things we can do as clinicians, parents, coaches, and mentors are:

What we also teach are a lifelong ways of coping, lifelong body positivity, and a lifelong sense of self.
Meet the Expert:
Clair Mellenthin is a renowned author, speaker, and play therapist. She is the author of the best-selling books Attachment Centered Play Therapy (2019); Play Therapy: Engaging & Powerful Techniques for the Treatment of Childhood Disorders; My Many Colors of Me Workbook, and has authored several chapters. She is a sought-after speaker, clinical supervisor, and an adjunct faculty member at the University of Southern California MSW program. She is the Past-President of the Utah Association For Play Therapy and remains an active member on the Board of Directors. Ms. Mellenthin holds a master’s degree in Social Work form the University of Southern California. Throughout her career, she has specialized in providing play therapy to children, teens, and their families. She is currently the Director of Child & Adolescents at Wasatch Family Therapy. Ms. Mellenthin frequently presents professional play therapy and family therapy trainings on Attachment Centered Play Therapy and Trauma nationally and internationally as well as appears on local and nation Tv and radio as an expert on children and family issues.