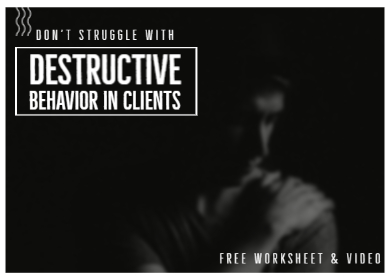 Are you struggling to help your clients change their self-destructive behaviors?

Do the behaviors appear to come out of the blue, with no warning and you’re getting frustrated with the lack of therapeutic progress?

Today I want to share the role of Behavior Analysis tool. Behavioral Analysis (also called chain analysis or change analysis) is a tool used to understand what precedes and follows a behavior, usually called a “problem behavior” or “target behavior.” the more we understand about our behaviors, the more options we have for changing ineffective ones. It should be noted, though, that behavior analysis can be used to understand more about effective behaviors too: what helps to prompt them, and how the results of performing those behaviors differ from the consequences of target behaviors. Understanding more about our effective behaviors can lead us to strengthen them.

Do not be intimidated by behavior analysis. Although it can get quite detailed, the simplest behavior analysis is “A-B-C.” What are the Antecedents leading to the Behavior of interest, and what Consequences follow it? When a sequential, step-by-step picture of the antecedents and consequences of any behavior is established, you can look at each step to problem-solve with skills or actions that will create positive change. These problem-solving steps are called “solution analysis.”

Behavior analysis starts by identifying the specific target behavior. Examples might include drinking or getting high, self-injury, not participating in therapy, missing an appointment, not taking medications, or breaking a program rule. After the behavior is identified, the prompting event, or what triggered or set off the behavior, is described. Then, leading up to the prompting event, it is necessary to investigate what made you more vulnerable to acting on the target behavior in the first place. For example, did you experience poor sleep, miss medications, get into a fight, or leave open opportunities to engage in unskillful behavior?

As you or your client complete a behavior and solution analysis, remember to be nonjudgmental and accountable. The goal of this tool is to help your client apply these skills so they can be more effective next time.

The following free video and worksheet download will show you how you can engage your clients, how you can help them understand what's behind these behaviors, and more importantly, how you can use this awareness to help them to change.

Do you want to revolutionize your practice? 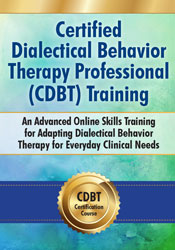 Imagine your toughest clients...the clients that other therapists have given up on...

YOU can be the therapist finally able to help them break through severe and chronic problems including personality disorders, self-destructive behaviors and more!

When you complete this intensive training, you'll be prepared to effectively apply proven DBT techniques and tools in your practice in a flexible way, specific to your client population, to improve treatment outcomes and your practice.

Plus, you can end this course and become a Certified Dialectical Behavior Therapy Professional (CDBT) at no additional cost to you!

REGISTER TODAY
Meet the Expert:
Lane Pederson Psy.D, LP, has provided Dialectical Behavior Therapy (DBT) training and consultation to over 10,000 professionals in the United States, Australia, South Africa, Dubai, Canada, and Mexico through his training and consultation company, Lane Pederson and Associates, LLC (www.DrLanePederson.com). A real world practitioner, Dr. Pederson co-owns Mental Health Systems, PC (MHS), one of the largest DBT-specialized practices in the United States with four clinic locations in Minnesota (www.mhs-dbt.com). At MHS Dr. Pederson has developed DBT programs for adolescents, adults, people with dual disorders, and people with developmental disabilities. He has served as clinical and training directors, has directed practice-based clinical outcome studies, and has overseen the care of thousands of clients in need of intensive outpatient services.