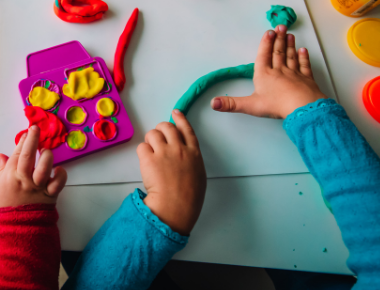 After these scary experiences, a vacuum of silence often remains. Caregivers are unavailable or so steeped in their own shame or other big emotions that they do not provide structured stories to their children. These children need interventions that help bring the hard story in the room and that build a coherent narrative.

In the TraumaPlay model, therapists do so by assuming the role of Storykeeper, in which they look at the current big behavior and trace it back to its earliest origins and then help the client make sense of how the two are connected.

For example, consider the case of Billy, a four-year-old boy who was adopted domestically at birth. Billy was born addicted to methamphetamines. The nurses and doctors who took care of him in those early days reported that Billy experienced the worst case of withdrawal they had ever seen. He was on the highest doses of morphine allowed and continued to seize, cry inconsolably, shake, pass out, and vomit.

Billy’s adoptive mother, who was there from birth, spoke of holding him and rocking him but being unable to soothe him. Now, at four years old, this little one is avoidant and unable to ask for what he needs. Instead, he makes demands and begins to tantrum when his parents try to take care of his hurts. Billy is in need of a story.

The continuing growth for therapists who work as Storykeepers is to figure out how much truth to tell and how to share that truth in a way that brings context and understanding to the big behaviors in developmentally sensitive terms.

Sometimes children have the factual account of a story—the logical, linear, linguistic narrative—but the story doesn’t integrate the affectual components (feelings), the cognitive components (thoughts), or the somatic components (body-based experiences) of the scary thing that happened.

When trauma has happened pre-linguistically, children may have the body-based experiences stored as implicit memories with no conscious sense of remembering, and they may need help identifying the source of these bodily reactions. When a child is experiencing the intrusive or avoidance symptoms of PTSD, building a coherent narrative becomes even more important.

Try this intervention to help playfully structure storytelling when it is needed. 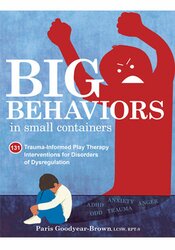 When it comes to working with dysregulated children, sometimes the biggest behaviors come in the smallest containers.

From tantrums and defiance to self-injury and withdrawal, even the most skilled professionals find themselves focused on extinguishing the troubling behavior rather than stepping back to ask: What is the underlying emotional need?

In Big Behaviors in Small Containers, you’ll find 131 practical, fun, and ready-to-use play therapy interventions that shift the paradigm around problematic behaviors to allow for therapeutic growth and healing. Based on TraumaPlay®, a treatment approach that prioritizes attachment, co-regulation, and the science of the stress response system, the interventions inside will help kids:


Whether you’re a therapist, teacher, doctor, caregiver, or trusted grown-up in a child’s life, the tools inside will allow you to become the co-regulating, nurturing, and consistent presence that your “small container” needs to remain grounded in the face of stress, big feelings, and difficult situations.
BUY NOW
Meet the Expert:
Paris Goodyear-Brown, MSSW, LCSW, RPT-S, certified EMDR therapist, is the creator of TraumaPlay®, a flexibly sequential play therapy model for treating trauma and attachment disturbances in family systems. She is the founder of the TraumaPlay® Institute, the Clinical Director of Nurture House, an Adjunct Instructor of Psychiatric Mental Health at Vanderbilt University, and an EMDRIA Approved Consultant. Paris has an international reputation as a dynamic and compassionate speaker. She is a sought-after supervisor, a master clinician, and a prolific author. As a thought leader in the fields of child trauma and play therapy, she has received the APT award for Play Therapy Promotion and Education, given a Ted Talk on Trauma and Play Therapy and served as the Executive Director of the Lipscomb Play Therapy and Expressive Arts Center. She is on the board of TNAPT and is the author of multiple chapters and articles including Play Therapy with Traumatized Children and Parents as Partners in Child Therapy: A Clinician’s Guide. Her twelfth book, Big Behaviors in Small Containers, is hot off the press! Paris finds great joy in training clinicians all over the world in helping children and their families speak the unspeakable.