Free exercise from Maybe You Should Talk to Someone: The Workbook 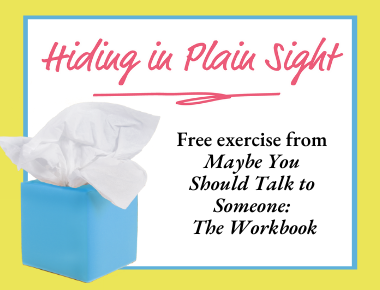 Some of the most profound patterns we have can be found within our most significant relationships. As I say in the book, “We marry our unfinished business.” But that notion extends beyond romantic entanglements; we can, and often do, reckon with the past through many types of relationships. How we engage with a boss or other person in power can tell us something important about how we historically respond to authority figures. The kinds of friendships we seek out—loving, supportive, loaded with drama, toxic—speak to early formative relationships that taught us what we can expect from others and what is expected of us.

When I began seeing Charlotte, she laid out a relational pattern of hers pretty quickly, though it was dressed up in different language. She told me repeatedly that when it came to romantic interests, she had a type: unavailable. What most people mean by “type” is a sense of attraction—a type of physical appearance or a type of personality that turns them on. But what underlies a person’s type, in fact, is a sense of familiarity. It’s no coincidence that people who had angry parents often end up choosing angry partners, that those with alcoholic parents are frequently drawn to partners who drink quite a bit, or that those who had withdrawn or critical parents find themselves married to spouses who are withdrawn or critical.

Why would people do this to themselves? Because the pull toward that feeling of “home” makes what they want as adults hard to disentangle from what they experienced as children. They have an uncanny attraction to people who share the characteristics of a parent who in some way hurt them. In the beginning of a relationship, these characteristics will be barely perceptible, but the unconscious has a finely tuned radar system inaccessible to the conscious mind. It’s not that people want to get hurt again. It’s that they want to master a situation in which they felt helpless as children. Freud called this repetition compulsion. Maybe this time, the unconscious imagines, I can go back and heal that wound from long ago by engaging with somebody familiar, but new. The only problem is, by choosing familiar partners, people guarantee the opposite result: They reopen the wounds and feel even more inadequate and unlovable.

This pattern of behavior happens completely outside of awareness. Charlotte, for instance, said that she wanted a reliable boyfriend capable of intimacy, but every time she met somebody who was her type, chaos and frustration ensued. Conversely, after a recent date with a guy who seemed to possess many of the qualities she said she wanted in a partner, she came to therapy and reported: “It’s too bad, but there just wasn’t any chemistry.” To her unconscious, his emotional stability felt too foreign. Much better to repeat the pattern it knows so well, despite the fact that it was forcing her romantic life to spin in circles. Same guy, different name, same outcome.

I always say that people don’t have to tell you their stories with words because they always act them out for you. That’s why noticing the patterns in our behavior is where we’ll start. In these these next exercises we’re going to try to coax some of our patterns out of hiding.

Did you miss the first sneak peek of Maybe You Should Talk to Someone: The Workbook? Be sure to check it out here and see how picking apart pain points can unearth opportunities for growth.

Get the Toolkit for Editing Your Story & Changing Your Life 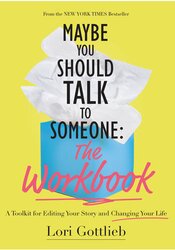 When Maybe You Should Talk to Someone was released into the world, it became an instant New York Times bestseller and international phenomenon, with readers across the globe finding their truth in the powerful stories Lori Gottlieb shared from inside her therapy room. As millions highlighted and underlined page after page, a movement took shape and they asked for more: Can you take these lessons and create for us a guide as transformative as the book itself?

Lori decided to do just that. In this empowering, one-of-a-kind workbook, Lori offers a step-by-step process for becoming the author of your own life by giving it a thorough edit. Using eye-opening concepts, thought-provoking exercises, compelling writing prompts, and real examples from the patients in the original book, Lori has created an easy-to-follow guide through the journey of becoming our own editors, examining aspects of our narratives that hold us back, and discovering the ways in which changing our stories can change our lives.

An experience, a meditation, and a practical toolkit combined into one, Maybe You Should Talk to Someone: The Workbook is the companion readers have been asking for: a revolutionary method for understanding which stories to keep and which to revise so that we can create our own personal masterpieces. By the end of this “unknowing,” you will be surprised, inspired, and most of all, liberated.
ORDER YOUR COPY
Meet the Expert:
Lori Gottlieb is a psychotherapist and New York Times bestselling author of Maybe You Should Talk to Someone, which has sold over one million copies and is currently being adapted as a television series. In addition to her clinical practice, she writes The Atlantic's weekly "Dear Therapist" advice column and is co-host of the popular "Dear Therapists" podcast produced by Katie Couric. She contributes regularly to The New York Times and many other publications, and her recent TED Talk was one of the Top 10 Most Watched of the Year.