All Parts are Welcome 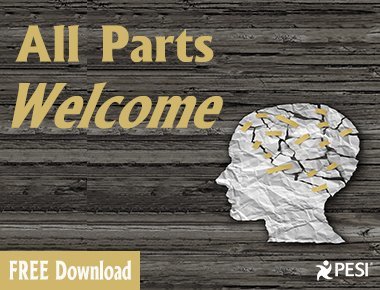 I struggled this past week with embracing one of the core beliefs in the Internal Family Systems (IFS) Model of therapy, that all parts are welcome.
I was sitting with one of my clients whom I’ve known for many years, and periodically his suicidal part would show up in our sessions. Typically, my response would be, “Tom, tell the suicidal part that you’re glad it’s here. Ask him why he felt the need to show up just then and let him know that we trust he’s holding something important for you.” All of this is in line with the IFS framework that protective parts have positive intentions.
On this particular occasion, however, his suicidal part showed up and it wasn’t so easy for me to hold this perspective and to remain open and curious toward the part (qualities that are consistent with what IFS calls “Self-energy”). Tom was talking about how his wife and daughter are inseparable. How they’re in constant contact by texting or calling each other several times a day. How they often go out to dinner together and recently they even planned a vacation together during a time when he would be out of town on a business trip. Tom felt totally excluded. I knew this would trigger some of his family-of-origin issues, particularly with regard to his younger sister who was born with special needs and took much of his parents’ time, energy and attention, often leaving him feeling alone and unwanted.
I pointed out this connection to Tom’s past, but he was unable to hear any of it. The suicidal part was activated in a way that felt different from past experiences. It had totally taken him over and there was no access to any other view or perspective within him. “It’s better for me and everyone around me if I just kill myself,” Tom said. “They can finally have what they want: each other. I know they hate me and it’s clear that they don’t give a shit about me.”
It was obvious that Tom’s suicidal part was escalating. In retrospect, I see that I had left the IFS frame that all parts are welcome when I tried to point out to him why his wife and daughter had become so close to each other. I reminded him what Sue and Jenna had shared with us in a previous family session: that they are so close because they needed to band together when his drinking got so out of control a few years ago. I tried to soften things a bit by pointing out how it was better now after he promised to drink only once per week. I wasn’t interested and curious to learn more from the part, I was trying to explain things to it and convince it not to feel so bad. “See, no matter what I do, they still hate me and I can’t believe that they’re planning a trip without me,” he said. “I’m done.” Tom abruptly got up and left the session, slamming the door behind him.
The hair on the back of my neck stood up. I wasn’t sure what my next move should be or what Tom’s suicidal part might do.
When a part gets intense like this and is unwilling to separate from the client, we typically move into a technique called “Direct Access.” Here the therapist talks directly to the client’s part, learning from it first-hand why its position is so important at that particular moment.
Luckily, Tom did come back later that week for his session and I immediately moved into Direct Access with his suicidal part. “I trust that you’re trying to help Tom and I am curious to hear more about your role,” I said calmly. The shift in my being more open and willing to hear directly from the part, allowed it to relax and share more about its role within Tom’s system. It said that everything started when Tom was 18 years old and his father committed suicide, leaving him in charge of the family. It told me that its job was similar to a barometer, that when things got too intense for Tom it had to show up and shut off the pain so he could function. Its job was to help him not feel so hurt and alone in the world. It also shared that it was currently so active because Tom was feeling like a failure as a father.
After hearing all of this, I was able to have genuine compassion for his suicidal part and I better understood how it was working so hard to help Tom not feel so bad about himself. Luckily the part shifted its intensity and became willing work toward the common goal of helping Tom feel better.
Holding the view that all parts are welcome gives therapists a new way to be with extreme and often scary parts. When we remain open to listening and are willing to talk directly to parts, they often soften and feel grateful for being heard and validated. This typically opens the door for a deeper connection within the therapeutic relationship and paves the way for greater vulnerability and the possibility of healing the wound that the extreme part protects.
Internal Family Systems Therapy (IFS) provides a revolutionary treatment plan for PTSD, anxiety, depression, substance abuse, eating disorders and more. Using a non-pathologizing, accelerated approach — rooted in neuroscience — IFS applies inner resources and self-compassion for healing emotional wounding at its core. Use this FREE resource with your clients!
Your partner in success,
Frank G. Anderson, MD