How to maximize your brain's health 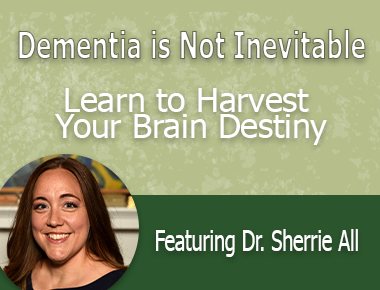 As you know, age is the number one contributing factor to the development of dementia. With the Baby Boomers — the second largest generation in America — entering retirement, a boom in dementia cases is expected. However...

...dementia is NOT an inevitable consequence of old age.

Promising research is showing us there may be methods to alleviate the risk of early onset Alzheimer’s and other forms of dementia!

When studying the brains of people with Alzheimer’s disease, it was discovered that those who were considered “sharp as a tack” had notably larger brains than those who displayed signs of advanced dementia, although both had the same amount of Alzheimer’s disease in their brains. The conclusion: a larger brain can better withstand the effects of the beta-amyloid plaques.

In this short video, Dr. Sherrie All will explain how investment in the brain can help control brain cell growth, effectively delaying onset of dementia.
Want to deepen your understanding of Alzheimer’s and other dementias? Become a Certified Dementia Care Specialist (CDCS) while learning straightforward strategies and subtle tactics to make your practice more effective. 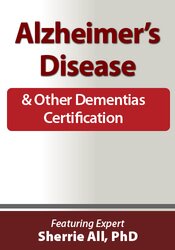 Join Dr. Sherrie All in this online certification course as she provides you with the assessment tools and critical interventions you need to identify and differentiate between dementias, prevent and reduce difficult behaviors, and improve your ability to communicate with cognitively impaired patients! More than just an overview of dementia and Alzheimer’s, this course will offer practical solutions to some of the most challenging real-life situations you face and bring you up to speed on the latest medications, preventative treatments, and advances in early detection that could impact your work. Throughout, Dr. All will guide you to build your essential skills, better understand the complexities of the disease, and discover how you can employ safe and effective best practices to provide quality care. Plus, become a Certified Dementia Care Specialist (CDCS)…included in the course price.

Learn More!
Meet the Expert:
Sherrie All, PhD, is a Licensed Clinical Psychologist specializing in neuropsychology, cognitive rehabilitation and brain health. She owns and directs the Chicago Center for Cognitive Wellness (CCCW), a group neuropsychology practice offering assessment and treatment services in cognitive rehabilitation and psychotherapy to people affected by cognitive decline. As a leader in the field of brain health, Dr. All works to educate the public on brain-healthy behaviors and innovating brain health coaching. Her work in this area earned her the 2010 Sharpbrains Innovation Award for Most Innovative Mental Health Program as well as the attention of media outlets such as The New Yorker and Crain’s Chicago Business.

Dr. All trains other professionals in how to implement cognitive rehabilitation interventions into their practice, through continuing education programs, supervision and individual consultations. She shares her detailed understanding of the brain and brain-behavior relationships in an engaging and relatable way. Dr. All’s forthcoming book and current keynote address, “Brain Destiny: Everyday Choices to Lower Your Risk for Dementia and Change Your Life”, offers an entertaining way of promoting a popular understanding of the scientific theory of cognitive reserve to empower people to effectively care for their brains. She has been an invited speaker by the Lifetime Education and Renewal Network (LEARN) of the American Society on Aging (ASA) and speaks regularly on the topics of brain health, cognitive rehabilitation and interventions for early-stage dementia. Dr. All’s research includes examination of functional MRI (fMRI) and electrophysiological (EEG) biomarkers of cognitive deficits.