Meeting Teen Clients Where They Are

Here's What They Respond To 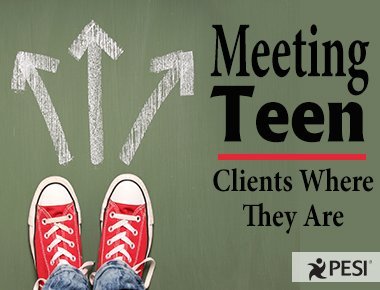 "How do I get her to talk about her feelings?" asks Jean, a counseling intern about to meet 13-year-old Hannah for an initial appointment. "I'm not sure what to say to her." Hannah will be the first client Jean has seen without a more experienced cotherapist at her side, and she's worried.

"Don't worry about getting her to talk about her feelings," I say to Jean. "If you're doing anything close to what Hannah needs you to do, you won't have to. She'll show you what her feelings are."

It hadn't been all that long ago that I, too, had thought a client's feelings were the Holy Grail of therapy. But I've realized in the years since that direct questions about feelings are actually a source of irritation to kids. They'll talk about them, alright, but not in a discussion isolated from the conversation at hand, with a spotlight turned on it. Besides, the question itself is now so predictable, parodied even by the people it's supposed to serve.

Most teens are in therapy only because their parents, their teachers, the juvenile court judge, and/or some adult in authority somewhere has told them they must see a therapist. Consequently, they often find most standard, shrink-wrapped attempts to "engage" them infuriating.

Most of us were never trained to talk to adolescents. This hit me right between the eyes when I took my first job as staff psychologist at a residential treatment center for socially and emotionally disturbed boys and girls who didn't give a crap about their unconscious conflicts or anything else having to do with therapy. I'd ask them, "What are your treatment goals?" and they'd look at me as if to say, "Lady, is there anything on my face that says I have a treatment goal?"

When I began treating adolescents in earnest, I realized that if I wanted to keep one of them sitting in my office for more than half a session, I'd have to change how I spoke with them. We needed language that was more natural, shared, mutually revealing than the questioning, interpreting, ritualized clinical language I'd been taught. I did learn this new tongue, but not by myself—I was taught by these angry, unhappy kids. They became my first postgraduate instructors as they began to respond to our more transparent and unaffected encounters. They showed me that successful treatment with them wasn't a matter of how I thought therapy "should" go, but of what would make them want to come back a second and third time.

I began to realize that the point of talking to them was to get them a little curious about what we might wind up chatting, joking, or arguing about in the current or following session. Another point of our talks was to get them to be less afraid of hope. So many of these kids had been let down so often by different adults, institutions, and circumstances that they'd learned to protect themselves by refusing to allow themselves to want anything they thought they might not get—lasting friendship, support from parents and teachers, good grades, a sense of self-worth, and certainly any real help from a therapist. So, I started to feel that if I could nudge them along to think that they might want to try just a little bit, with my help, to get something they wanted, it would be a great leap forward in treatment.

The Gentle Art of Not Taking the Bait

Rachel, who was 15, was referred by her family physician when her mother discovered she'd been cutting herself. She offered no resistance to therapy and came to her sessions eagerly. Dressed in gray and black, and often wearing a hoodie pulled down low to cover much of her face, she was funny, warm, kindhearted, likable—and brimming with self-contempt. Sophisticated and circumspect in my office, she was, I learned from what she told me, quite different among her friends. With boys, she flaunted her sexuality—wearing tight clothes and a good deal of makeup, flirting strenuously—to make up for what she believed to be her subpar looks and personality. Partly because she was by nature empathetic to other people's pain (being only too aware of her own) and partly to compensate for her own feelings of inferiority, she became the go-to person for all her friends who wanted to discuss their problems. She was content to absorb their pain in exchange for feeling valued and tended to say yes and agree to do things even when she really didn't want to.

Rachel was also very reckless and self-destructive in a willful, intentional kind of way. In the beginning, she told me the kind of things she did—something guaranteed to raise a therapist's anxiety level. She burned her arm at night with a heated safety pin or cut herself with a knife in order to focus her thoughts away from her problems, so that she could fall asleep. Though she'd never engaged in sexual intercourse, she mused out loud about when she would, with whom she would, and how many partners she'd have should she start having sex. Would I respond as every other adult had? I began to understand that one key to working effectively with this girl was in not reacting with obvious alarm, even though everything about the situation and her clear anguish seemed to clamor for it.

"She's much prettier than I am anyway," Rachel said to me one day, by way of summarizing why her boyfriend had dumped her for another girl in their grade. "So I really can't blame him." She clearly meant it, and her sad, revealing comment simply hung in the air between us.

This is the kind of statement that would make many therapists want to give Rachel a pat little speech: being pretty isn't everything; if that's how her ex-boyfriend appraises girlfriends, then maybe he's not such good boyfriend material after all; you're pretty, too. Besides the fact that most teenage girls who've been dumped wouldn't believe these sentiments, had I given this kind of response, it would have made the exchange all about me and what I wanted her to believe, instead of about what she thought and felt.

Instead, I asked her, "Are there differences between boys who pick their girlfriends based on how pretty they are and those who base their decisions on a whole bunch of different things?" After we'd discussed her male friends' criteria for selecting girlfriends for a while, I asked, "Hey, how come when you tell me about the boys in your school, it always sounds like they're in the driver's seat?" These questions, with their gentle counterpoints to Rachel's pliant manner around boys, served to nibble at the edges of her way of thinking about boys, girls, and their relationships with each other.

There were other interventions I mulled over, looking for the right place to introduce them. Instead of openly pointing out to Rachel what I regarded as her instinctive kindness, I just said that I'd been moved by the stories she'd told me about caring tenderly for her two younger brothers when her mother was away and about getting two girls to stop teasing a third online. "You keep these two facets of your personality—your caring nature and high sense of justice—under such wraps though; nobody sees this part of you." I said this simply as an observation and opinion—not implied advice—indicating no requirement for her to respond. But she did, with a shrug. "It's no big deal," she said.

"Rachel," I responded. "Why is it so important for you to present yourself as less than you are?"

"Because I don't care," she replied. She then added, "Actually, I think I just really hate myself."

It would have been tempting to ask, in deeply concerned tones, "But why? You have no reason to hate yourself. You're such a lovely, kind, good person. You just aren't having a very good day." Such a response—essentially denying that she feels what she feels—could only inspire the client to clam up or just get up and walk out. Instead, we sat together quietly and easily for the remaining few minutes of the session.

Soon after Rachel's comment about realizing she hated herself, I started noticing changes in her demeanor and in the stories she brought to therapy. She looked more carefree, and one day said she was aware of "smiling a lot." She hadn't mentioned school in months, dwelling more on issues with friends and family. Now, she began talking about school, telling me that she'd been writing poems about "conscience," and "putting down the knife." Rachel was offended when her mother suggested she was cutting herself because of a boy, and even more offended when her mother asked if it was because of her. "These are my scars!" Rachel pronounced to me in session. "I don't do this because of a boy. That would be kind of pathetic, don't you think? And my mother just thinks everything is all about her!" At some point in a conversation around this time, I found the right opportunity to say to Rachel, "You know, you have a 'no' in you now." She nodded.

Shortly thereafter, Rachel's mother called me to say that her daughter had indicated she wanted to come in to therapy less often since she didn't have all that much to talk about anymore.

Meeting Clients Where They Are

Latent power struggles in therapy make their way to the surface whenever our clients begin to see us as a threat to a point of view or sense of injustice they're not yet ready to relinquish. But kids will let go when they want to. The work of therapy isn't getting them to do it, but helping them want to. More important, though, is to know that they don't have to let go in order for you to take the therapy forward.

Because teenage clients are legally underage, we tend to treat them as if they weren't fully capable of making their own decisions. But no matter what we want for them or can see in them, the choice of whether to accept our help is always theirs—just as it is for adult clients we treat. Unless we honor that choice, creating a therapeutic climate in which they feel respected and able to accept our help is impossible.

We already know some of the things teens don't respond well to in therapy—excessive questioning, standardized treatment protocols, enforced between-session homework—so let's stop using them. They do respond well to active, authentic, and respectful relating, direct feedback, and advice. If these were to become a standard part of clinical training and treatment, we'd be taking a great step toward providing services to teens that they'd be as interested in getting as we've been in offering.

This blog is excerpted from "Why Teens Hate Therapy," by Janet Edgette. The full version is available in the May/June 2017 issue, The Craft of Conversation: Kindling the Spark of Therapeutic Change.

Read more FREE articles like this on Children and Adolescents.

Editor's Note: This post was originally published in the April 2018 issue of Psychotherapy Networker