Out of the Tunnel: A Series on escaping the path of depression—Part 2 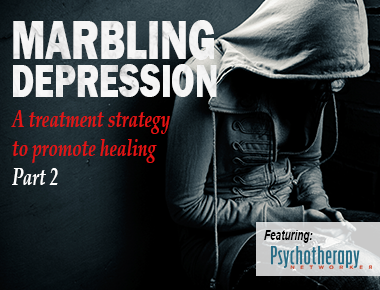 In the first part of our series on marbling depression, we explored three techniques to reflect in the past tense, localize global thoughts and validate perceptions. Now we will explore another method of marbling depression: Inclusion.

A while ago, I heard a story about a study of people who'd jumped off the Golden Gate Bridge, intending suicide, but had been rescued or survived the attempt. The researchers were searching for something that might help them identify people at risk and prevent future suicides. They found one commonality among the survivors: on the way down from the bridge to the frigid waters below, almost all of them had some variation on the thought Maybe this wasn't such a good idea. That indicates to me that very few people are 100 percent hopeless, even in the moments before their imminent death (or perhaps they're even more ambivalent when things have gone so far).

This means that there are two kinds of permission that can be helpful with people who are depressed: "Permission To" and "Permission Not To." These two types of permission are reflected in the following statements: "It's okay to feel depressed" and "You don't have to have hope right now."

Now I want to be clear here that the permissions I suggest are mostly about experience, not actions. For example, I wouldn't say to someone, "It's okay to kill yourself," but instead, "It's not unusual for people feeling as bad as you do to think about killing themselves. It's okay to think that. It doesn't mean you'll act on it." So there's no permission for self-harming actions or actions that might hurt someone else.

Here are some examples of suggested permissive responses.

Depressed person: "It's all meaningless."

Possible responses: "It's okay not to have meaning right now." "You don't have to know what it all means right now. We're just working on how to get you feeling better today and tomorrow."

Possible responses: "It's okay to feel hollow." "Feeling hollow is pretty common for someone who's depressed. You don't have to feel any other way right now."

The next way to give permission is more complex and nuanced and may be especially helpful for people who are depressed. It involves giving permission to have two opposite feelings or to be two ways at once. For example, someone may feel like dying and also want to live. Or he may feel like killing himself but not want to hurt his family and friends by killing himself.

This technique, then, involves giving the depressed person permission to include, feel, or be those contradictory things simultaneously. One major way to communicate this is to connect the two contradictory aspects with the conjunction and. The word and signifies inclusion of both, whereas the conjunctions but and or imply one or the other.

"You felt as if you couldn't get out of bed today, and you got up and came to see me."

"You feel as if there's is no end to this, and you think you'll come out of it."

"You can't find your sense of meaning, and you think you're going through this depression for a reason."

You might have to stumble around with this before you hit on the inclusive reflection that really moves the person, helps him feel both understood and validated at a deep level, and perhaps helps him shift in some way. This technique can be challenging because this isn't a logical way to speak or think.

In the English language, we have a natural way to use inclusion called the oxymoron. This is when two opposite concepts are put together in a two-word phrase, such as sweet sorrow or exquisite suffering. A more expanded way of using oxymorons is to spread them apart in a sentence or phrase; this is called the apposition of opposites.

"It seems that you've spent so much time in darkness that your eyes have adjusted and can see things in the dark that others can't."

"You're hoping against hope that this depression will lift."

As you can see from the above examples, there can be a place for using oxymorons in therapy to emphasize that it's okay and even beneficial to have conflicting perceptions and experience opposing ideas. One last application of the inclusion of the opposites technique is to include the negative with the positive by using tag questions. Tag questions are little questions added on to the end of a statement that seem to say the opposite.

Milton Erickson once told me, "If you can't say the 'no,' the patient has to say it." He regularly used these tag questions. Here are some examples:

"You don't think you'll get better, do you?"

"You're not feeling better, are you?"

"You're starting to feel better, aren't you?"

If you think of the Asian symbol of the yin yang, you will get this technique. There is a yes in the no and a no in the yes, and they complete each other to make a whole. The point of this method is to help people become more integrated, including all their aspects, so they feel less fragmented or troubled by the disparate aspects of their experience, feelings, or personalities. Without this integration, clients often feel ashamed or torn in two directions, which can increase their emotional distress and deepen their depression.

Here's an example of a client-therapist interaction in which the client talks about his depression but indicates that there's more to the story than just depression.

Client: "Sometimes I just feel so hopeless. I don't know if I'll ever come out of this hole I'm in. Maybe getting this new job will help. My old job just sucked."

Therapist: "When you're afraid you won't come out of it, it seems hopeless, but when you think about this new job, you get some sense of hope."

One specific way to discover and highlight exceptions is to listen for and acknowledge moments of non-depression. Perhaps the person got absorbed in a movie and "forgot himself" for a few hours. Perhaps he spent time with a friend or family member and felt better for a time. Perhaps there was a time in the recent past when, inexplicably, his depression was better for a day, a week, or longer.

One last way to discover exceptions is to investigate why the depression isn't worse or the person isn't less functional. This is sort of a backward way of discovering exceptions. For example, you might ask your client, "How have you been able to go to work or visit with friends when some people with depression haven't been able to do those things?" Or, "What's stopped you from acting on those suicidal thoughts?" Or, "Why haven't you given up on seeking help?" The answers to these and similar questions can contribute to the marbling.

Here's an example of the kind of inquiry you might make: "I was a little surprised to hear that you finished that big project at work even though I know you've been feeling like hell. If I were talking to someone else who was depressed and had a similar kind of project in front of them, what would I tell them about how you were able to pull that off even though you felt so impaired?"

Depression as a Bad Trance

I learned hypnosis many years ago when I began to recognize some similarities between a hypnotic trance and what I began to think of as a "symptom trance" or "problem trance." Both types of trances often involve a narrowing of the focus of attention, and the induction of both involves rhythmic repetition. In Sense and Nonsense in Psychology, Hans Eysenck tells a story about a young English surgeon, just about through with his training, who was drafted into the army during World War I and sent to fight on the fields of France. On the battlefield, he came across a French soldier severely wounded by a mortar shell, writhing in pain and doing further damage to himself. The soldier was in imminent danger of dying unless the Englishman could get him to stay still until he could get him back to the surgical tent for treatment.

In desperation, the Englishman remembered a demonstration of hypnosis he'd seen during his medical training and decided to try what he remembered of hypnotic induction. But he didn't know much French, so the best he could do was repeat again and again to the writhing Frenchman the only French words he could conjure up: "Your eyes are closing. Your eyes are closing."

To his amazement, the Frenchman stopped writhing and his breathing slowed. He appeared to be in a trance that lasted long enough to get him back to the medical tent, where the British surgeons did indeed save his life. After the operation, the medical student told the British surgeons the story of his hypnosis. They all began laughing and told the baffled student that what he had really said was "Your nostrils are closing. Your nostrils are closing."

What the story illustrates is that it was the repetition, not necessarily the correct words, that had the hypnotic effect. In a more insidious way, a similar process happens in depression. The depressed person repeats the same thoughts, activities, feelings, and experiences again and again and begins to become entranced. Only the trance is not a healing trance, a therapeutic trance, but a "depression trance," which induces more and more depression as it's repeated. Marbling can be an invaluable tool in breaking the depression trance.
For the past 30+ years, Bill O’Hanlon, MS, LMFT, has given over 2,000 talks around the world and was awarded the Outstanding Mental Health Educator of the Year in 2001 by the New England Educational Institute. He is a Licensed Mental Health Professional, Certified Professional Counselor, and a Licensed Marriage and Family Therapist. An accomplished author, Bill is known for his storytelling, irreverent humor, clear and accessible style and his boundless enthusiasm for whatever he is doing.
This post is based on an article originally brought to life by our partner, Psychotherapy Networker.

The full article, “Out of the Tunnel: Escaping the Trance of Depression” written by Bill O’Hanlon, appeared in the Nov/Dec 2014 issue of Psychotherapy Networker magazine.