Out of the Tunnel: A Series on escaping the path of depression—Part 1 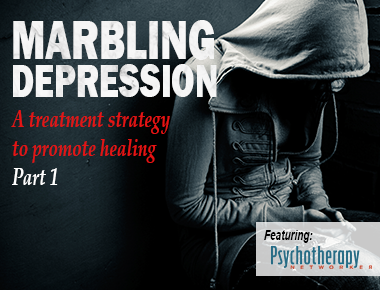 This if the first part of our series on depression treatment written by Bill O’Hanlon, MS, LMFT.
In recent years, we've learned that repeating patterns of experience, attention, conversation, and behavior can "groove" the brain; that is, your brain gets better and faster at doing whatever you do over and over again. This includes "doing" depression, feeling depressed feelings, talking about depression, and so forth. Thus we can unintentionally help our clients get better at doing depression by focusing exclusively on it.

To counter this effect, I like to use a method that I call "marbling." My father owned several meat-packing plants, and early on I learned that marbling refers to the fat streaks embedded in the leaner meat in a cut of steak. It gives the steak more flavor. In a similar way, but with less cholesterol, in therapy I suggest marbling discussions and evocation of non-depressed times and experiences in with discussion of depressed times and experiences. By going back and forth between investigations of depressed and non-depressed experiences and times, the person who's been depressed is reminded of resources and different experiences, and often begins to feel better during the conversation.

In this three part series, we will explore various ways of incorporating marbling to discover more about your clients individual depression map.

Working with people who are depressed requires a delicate balance. They're usually lost in their depressive experience and perspective, so you have to join them in that experience and let them know you have some sense of what they're going through. At the same time, you have to be careful not to get caught up in that discouragement and hopelessness along with them.

I think of it as having one foot in their experience and one foot out. I call this Acknowledgement and Possibility. It involves acknowledging the depressed person's suffering, validating his felt sense of things, and inviting him out of that experience.

When people don't feel heard, understood, or validated in their experience, they often appear "resistant" and uncooperative in therapy. On the other hand, if all one offers is acceptance and validation, it's all too easy to help the sufferer wallow and stay stuck in his depressive experience.

I remember a client I had early in my psychotherapy career who'd come in week after week soaking up my kind acceptance, unconditional positive regard, and empathy. She'd get her weekly support session and then go back to her miserable life. During one session-it was probably about our 22nd-I heard myself saying, "So, you're depressed again this week." And realized I wasn't really helping her.

Around that time, I began to study with the psychiatrist Milton Erickson, who had many creative ways of challenging the most difficult patients to move on and change. I began to incorporate some of his methods into my work and noticed that my clients were changing much more quickly than they had before. But I still liked the warm, kind, active listening I'd learned in my elementary counseling training and didn't want to lose that respectful approach. So I combined the best of both worlds and created this Acknowledgment and Possibility method. It not only respectfully acknowledges the person's painful and discouraging experiences, but also gives him a reminder that he isn't always and hasn't always been depressed. It can illuminate and prompt skills, abilities, and connections that can potentially lead the person out of depression or at least reduce his depression levels.

I came across a letter that Abraham Lincoln wrote during his presidency that illustrates his deft combination of joining and inviting. (Lincoln suffered from a lifelong tendency toward depression, or what was called melancholy in those days. He'd been close to suicide during two major depressive episodes in his younger years.) He found out that Fanny McCullough, the young adult daughter of one of his generals who'd been killed during the Civil War, had fallen into a depression that was lasting much longer than the usual grief period. She'd taken to her bed in despondency, and her loved ones were worried about her.

When Lincoln heard of her plight, he sat down and wrote the following letter. (Note: I've italicized some of the Acknowledgment and Possibility parts of the letter to highlight them.)

It is with deep grief that I learn of the death of your kind and brave Father; and, especially, that it is affecting your young heart beyond what is common in such cases. In this sad world of ours, sorrow comes to all; and, to the young, it comes with bitterest agony, because it takes them unawares. The older have learned to ever expect it. I am anxious to afford some alleviation of your present distress. Perfect relief is not possible, except with time. You cannot now realize that you will ever feel better. Is this not so? And yet it is a mistake. You are sure to be happy again. To know this, which is certainly true, will make you some less miserable now. I have had experience enough to know what I say; and you need only believe it to feel better at once.


What's so moving about this letter is the kind and powerful way Lincoln joins with Fanny's grief and validates her suffering while simultaneously inviting her out of it.

Three Techniques of Acknowledgement and Possibility

How do you join while simultaneously inviting? Here are three simple methods for putting one foot in and one foot out when talking with people who are depressed.

1. Reflect in the past tense. This technique may seem too simple, but it can have a subtle and helpful impact. It involves reflecting what the depressed person is telling you as if it has happened previously but is not necessarily occurring now. For example, if a person says, "I don't want to see anyone," you might respond, "You haven't wanted to see anyone." If the person says, "I'm suicidal," you might say, "You've thought seriously about killing yourself." In each of these responses, you'll notice that the reflection is couched in the past tense.

Here are two statements that a depressed person might make, along with some sample "reflect in the past tense" responses.

Depressed person: "Nothing will help."

Possible responses: "Nothing has helped." "You've tried a lot of things and haven't felt better." "You've been thinking that nothing will help."

2. From global to partial reflections. The next technique for acknowledging and inviting at the same time is to reflect the depressed person's generalized statements as more partial. When the person says something like "always," "never," "nobody," "nothing," "everybody," or another global term, you can reflect her statement or the feeling she's conveying but using more limited words, such as usually, typically, rarely, almost nobody, very few people, little, most everyone, and so on. Your task here is to help her feel understood, but at the same time to introduce a little space into the stuck place she feels herself to be in.

Your reflections can be less global than the person's original statement in both time (lately, recently, these days) and quantity (most, very few, almost everyone, little, rarely). For example, if the depressed person says, "Nothing is helping," you might respond with, "You've tried most everything and it hasn't worked much."

3. Validating perceptions but not unchanging truth or reality. To use this technique, acknowledge and validate the depressed person's perceptions without accepting the fixed, objective truth or unchanging reality of those perceptions.

When people are depressed, they often have an unrealistically pessimistic view of life, so agreeing with that pessimistic perspective may further discourage them. But we can't just dismiss the person's felt experience and tell her that her point of view is wrong. This technique involves finding a crucial balance by joining with and validating the person's felt sense of the way things are while separating those views from accepted reality.

To do this, use phrases such as your sense; as far as you can see; as far as you remember; the only way to handle this, in your view, was; and so on. The goal is to help the person feel heard and understood without joining in her distorted or discouraged conclusions.

Here's another example of a statement a depressed person might make, along with some suggested responses.

Possible responses: "You think you won't get better." "Your sense is that there's not much hope." "As far as you can tell, nothing's been working and you're afraid nothing will."

Of course, as you get more practiced at these techniques, you can combine two or three of them in the same reflection. For example, if the person says, "I've just got to kill myself. I can't take this anymore," you could use all three techniques in your response by saying, "So, you've really been so discouraged lately and suffering so much that killing yourself seems the best possibility for relief right now."

However, if the person gives you the sense that she feels invalidated or that your response minimizes her experience or suffering, you can switch to another of the techniques or return to pure acknowledgment for a time, leaving out any of the possibility elements.

For instance, suppose the person says, "I can't get up and going," and you use the partial reflections technique and respond with, "Sometimes getting going is really hard for you." What do you do if the person comes back with, "Not sometimes. Every damn day! You just don't get it, do you?"

You could respond with, "Sorry, I didn't mean to minimize what it's like for you to struggle with this. And you're right, I probably don't fully get how things are for you. So, your sense is that you can't get going pretty much every day."

The person will often respond with something like, "Well, on the days I see you, I manage to get up, but the other days it just feels too hard." And that is the beginning of possibility. Your task in using these techniques is to stay close to the person's experience while introducing small openings into her discouragement and sense of hopelessness. She'll let you know when those possibilities start to become viable and real for her when she begins talking about possibilities and change herself.
For the past 30+ years, Bill O'Hanlon, MS, LMFT, has given over 2,000 talks around the world and was awarded the Outstanding Mental Health Educator of the Year in 2001 by the New England Educational Institute. He is a Licensed Mental Health Professional, Certified Professional Counselor, and a Licensed Marriage and Family Therapist. An accomplished author, Bill is known for his storytelling, irreverent humor, clear and accessible style and his boundless enthusiasm for whatever he is doing.
This post is based on an article originally brought to life by our partner, Psychotherapy Networker.

The full article, “Out of the Tunnel: Escaping the Trance of Depression” written by Bill O'Hanlon, appeared in the Nov/Dec 2014 issue of Psychotherapy Networker magazine.