Putting the Pieces Together: Janina Fisher's perspective on the history of trauma treatment 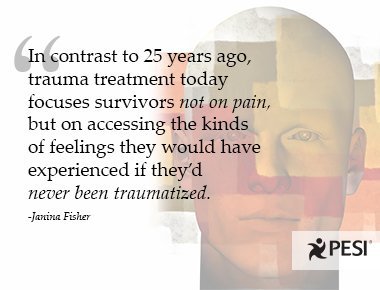 In 1989, trauma was still defined as "an event outside the range of normal human experience." As descendants of Freud, we believed that the therapist's role was to remain neutral and say as little as possible, often using the question, "How do you feel about that?"

By the early 1990s, however, The Courage to Heal, a self-help book by Ellen Bass and Laura Davis, introduced the main task of trauma work as retrieving the missing pieces of the abuse narrative and encouraging victims to confront their perpetrators with "their truth."

I was troubled by what the The Courage to Heal model required of my clients. At the hospital where I worked, we were seeing some dangerous effects of this approach. Many clients became overwhelmed by the flood of memories that came once Pandora's box was opened, and others began to doubt themselves when they couldn't access memories. Worse yet, family confrontations frequently ended in retraumatization for the victim. Rather than finding support, our clients often found themselves becoming family outcasts.

During this paradigm shift in the trauma-treatment world, Judith Herman, who'd published Father-Daughter Incest in 1980, was convinced that there was something deeply amiss and destabilizing about the confrontational tactics recommended by Bass and Davis. She believed that good trauma treatment required delaying the focus on traumatic memories until survivors felt safe in their daily lives and had sufficient affect regulation to tolerate the stress of remembering dark episodes in their histories.

Herman believed that therapists must become educators, providing information that made sense of the client's symptoms and helping them understand their intense reactions as survival adaptations to a dangerous and coercive childhood environment.

Just how revolutionary the idea of stabilization was in the early 1990s is illustrated by my meeting with a young client named Ariana. Despite a long history of childhood sexual abuse and many attempts to get help, she hadn't been able to tolerate therapy for more than a few months. "What told you in each of your experiences with therapy that it was time to leave?" I asked.

"Either the therapists wanted to make me cry-or they wanted to move in for the kill when they say, 'Next week, we can begin to address the trauma.’”

She's right, I thought. In those days, most trauma therapists would've wanted a client like Ariana to cry as evidence that she was "in touch" with her emotions.

It seemed to me, however, that stabilization gave clients their lives back, offered them a meaningful present as an alternative to reliving the past, and was invaluable in their learning to tolerate their often volatile emotions.

Busting the Monopoly of Talk Therapy
Neuroscience was brought into the field of trauma by psychiatrist Bessel van der Kolk. His curiosity and crusading spirit led him to explore trauma in ways that more cognitively focused researchers tended to ignore.

When I started working on van der Kolk's clinical team in 1996, he'd been arguing for years that traumatic memory included not just images and narratives, but also intrusive emotions, sensory phenomena, autonomic arousal, and physical actions and reactions. In 1994, when his paper The Body Keeps the Score was published in the American Journal of Psychiatry, the message that trauma often lives non-verbally in the body and brain was a source of tremendous discomfort in a field that didn't yet recognize body-based treatments as reputable. However, the advent of brain-scan technology allowed him to conduct the research needed to support his arguments. His findings laid the groundwork for an alliance between traumatologists and neurobiologists, one that challenged the reign of talk therapy.

In van der Kolk's 1994 study, 10 subjects volunteered to remember a traumatic event while undergoing a PET scan of their brain. As they began to recall these events, the cortical areas associated with narrative memory and verbal expression became inactive or inhibited, and instead there was increased activation of the right hemisphere amygdala, a tiny structure in the limbic system thought to be associated with storage of emotional memories without words. These volunteers had begun the scan with a memory they could put into words, but they quickly lost their ability to put language to their intense emotions, body sensations, and movements.

Retraumatization now made sense: if we purposefully or inadvertently trigger old traumatic responses, brain areas responsible for witnessing and verbalizing experience decrease activity or shut down, and the events are reexperienced in body sensations, impulses, images, and intense emotions without words.

This changes everything. Accustomed to using words as the primary treatment tool, talk therapists had to find other approaches, ones that weren't so dependent on language and narrative and could therefore address the brain and body shutdown demonstrated in van der Kolk's study.

Van der Kolk has been instrumental in bringing greater visibility and credibility to nontalk treatments. EMDR, in particular, expanded our notions of what constitutes effective psychotherapy in those early years.

Developed and extensively researched by psychologist Francine Shapiro in the late 1980s, it uses bilateral stimulation to help clients process traumatic experiences. However, because of EMDR's unconventional, finger-waving method and a lack of support from other researchers at the time, it seemed more snake oil than legitimate therapy to many skeptics in the field.

But by the early 2000s, news of EMDR's success was commonly being noted in popular newspapers and magazines in print and online. EMDR spurred another revolution for therapists. It suddenly seemed like a logical next step to learn other approaches that involved something more than sitting in a chair, listening, and talking.

How Neuroscience Changed Psychotherapy
With the publication of works such as Allan Schore's Affect Regulation and the Origin of the Self in 1994, Joseph LeDoux's The Emotional Brain in 1996, and Daniel Siegel's The Developing Mind in 1999, the world of science began to inspire new growth in psychotherapy. Each argued that not just social-emotional development, but the slowly maturing brain and nervous system, could be dramatically and perhaps permanently affected by early attachment relationships, neglect, and trauma.

The case of Jessie illustrates my own education into how neuroscience came to guide more and more of my clinical work. Jessie's long history of suicide attempts, hospitalizations, and dramatic deteriorations in functioning challenged everything I thought I knew about treating trauma up to this point.

As I pieced together sessions of contradictory conversations, I realized that although she may not consistently have remembered being traumatized, her body and nervous system were constantly being activated by the simple challenge of maintaining a consistent sense of selfhood from day to day.

According to LeDoux, Jessie's amygdala-the part of the brain that scans for danger and initiates the stress-response system-had undoubtedly become irritable in the context of growing up with a frightening mother, a nonprotective father, and equally helpless siblings. Schore's work helped me think about Jessie's suicidality as a problem in affect regulation, rather than a wish to die. With a dysregulated nervous system and a coping toolbox limited by her childhood, her ability to soothe and regulate emotions was minimal. The affect associated with even acknowledging her traumatic experiences dysregulated her nervous system and set off false alarms in her amygdala, shutting down or hyperactivating autonomic arousal, and interfering with her ability to self-observe and think clearly.

My reading of Schore encouraged me to become more of a right-brain-to-right-brain interactive neurobiological regulator. Instead of using words, logic, or interpretation of the connections between emotions and triggers, I'd base my response on her response.

I concentrated on just two goals: not activating her amygdala in session and using my voice and body language to soothe and regulate her nervous system. That year, she made no suicide attempts and was more stable in sessions.

The Contribution of Somatic Psychotherapy
In 1999, van der Kolk's motto became "Go to the body!" Personally, I resisted undergoing any body-centered psychotherapy training.

In spite of myself, I signed up for Pat Ogden's training on sensorimotor psychotherapy after watching videotapes of her help clients resolve trauma. Slowly, I came to understand that a body-centered psychotherapy was less about touch and more about how to work effectively and sensitively with emotions and cognitive schemas.

This new understanding enhanced my work with Jessie. I chuckled when she said she had nothing to talk about, and I went on to ask her, "When you say, 'I have nothing to talk about' what happens inside? Do you feel more open or closed? Do you pull back a little? Shut down?"

"It's more like a wall all the way down my front," she said.

"And is it a familiar feeling?" I continued gently.

"Oh, yes! I get it with anyone who gets close to me. When I'm wishing to get to know them or wanting them to like me, it's not there. But when they get closer, when they want something from me, the wall goes up."

"How clever!" I said. "So your body created the wall to protect you from people who want things. That's brilliant! Let's just be curious about how it works, how your body knows when people want things." I noticed that as I reframed the wall as a helpful tool, she looked more relaxed-and eager to keep talking. She was no longer that person who had "nothing to talk about."

The Mindfulness Revolution
Mindfulness is inherently about relationships: how we relate to our bodies, beliefs, and emotions. In contrast, the hallmark of PTSD is being trapped in the past. While the neuroscientific world gave us the beginning of a science-based explanation for understanding PTSD, mindfulness offers a way for clients to change their relationship to the darkness of their pasts.

I now ask clients to avoid their usual habits of attachment or aversion and discover how to build new habits of nonjudgment, which, with sufficient repetition, evolve into increasing self-compassion, or at least neutrality. In this way, the mindfulness movement has been a practical extension of the neuroscience revolution, which has shown us that mindful concentration activates the medial prefrontal cortex and decreases activity in the amygdala-which, in turn, eases regulation of the autonomic nervous system.

Helping clients heighten curiosity and interest while not automatically descending into shame and self-blame is a slower process than helping them tell a story, describe a problem, or even devise solutions.

Mindfulness has also introduced the psychotherapy community to the idea that, instead of looking to painful, dark emotional states, we can look to positive states of mind and body as the source and essence of healing.

As neuropsychologist and therapist Rick Hanson explains in his bestseller Hardwiring Happiness, we need to be aware of "the negativity bias"-the human brain's tendency to attend preferentially to negative stimuli, scan for danger rather than pleasure, and encode negative experiences more rapidly and permanently than positive ones. Hanson warns that if we don't attend to and install positive experiences in psychotherapy, "the brain's net will automatically keep catching negative experiences."

In contrast with 25 years ago, the trauma treatment of today focuses survivors not primarily on pain, but on accessing new, more expansive feelings, the kinds of feelings they would have experienced if they'd never been traumatized. Listening to and witnessing the clients' experiences remains central to the treatment process, but we've learned to give weight to our clients' attachment experiences, to how their brains and nervous systems work, their ability to notice rather than judge, their appreciation of what it took of them to survive life's setbacks, and increasing their capacity for noticing what's happening in their bodies as the primary pathway for staying in tune with the present moment.

As I often say to my clients...

The goal of therapy is simply helping them reclaim their birthright, the basics to which all children are entitled: a sense of safety, welcome, and well-being.

This post is based on an article originally brought to life by our partner, Psychotherapy Networker.Click here to read the full article, "Putting the Pieces Together," written by Janina Fisher.