What Hookup Culture Means for the Future of Millennial Love

Alexandra Solomon on the Emotional Toll of Hypersexualized Dating

Like most Gen X mental health professionals, my exposure to youth culture has waned over the years. The one direct experience that’s kept me in touch is that I teach an undergraduate course at Northwestern University called Building Loving and Lasting Relationships: Marriage 101.

As a former student shares the story of her first first date, I’m struck by how the whole concept of dating is brand new to this girl and her friends, though sexual experiences are not. On college campuses across the country, “hooking up” has all but replaced traditional, old-school dating rituals, and I can’t help feeling uneasy that for many young adults, getting naked with someone you barely know is less newsworthy than meeting up for a drink and a conversation. After all, this is exactly how she’s been living since she was in her early teens. “My generation is really public,” she explains. “We put it all on Facebook and Instagram. It’s how we live.”

Donna Freitas, in her book The End of Sex: How Hookup Culture Is Leaving a Generation Unhappy, Sexually Unfulfilled, and Confused about Intimacy, offers this definition of a hookup.


Of course, not every student participates in hookup culture. Some are indeed in committed relationships, while others remain single but take sexual relationships seriously. Many students are like Sasha, a bubbly and warm 20-year-old, who struggles with conflicting emotions around the hookup culture she’s immersed in. “This is what I always say about the hookup scene,” she tells me. “During the day I feel like a human being, and at night I feel like a sexual commodity. I’m focused on who might want to hook up with me, and not thinking about my personality or my aspirations.”

As she speaks, I’m struck by just how sad and scary her behavior seems to me. When strangers (or near-strangers) mix sexual activity with copious amounts of alcohol, giving and receiving sexual consent becomes a tricky business. A 2007 study in The Journal of Interpersonal Violence found that 90 percent of the unwanted sex reported by college women occurred during a hookup. But beyond the physical danger is the emotional one. Rather than focusing on who and what she desires, Sasha moves through her social life wondering who’ll desire her, removing herself from the driver’s seat of her own love life.

What Kayla, another student, shares next feels typical as well. “We were getting to know each other a little, and then one day I asked him what he’d done the night before, since we were at different parties.” She leans toward me as she shares this next piece, but her voice stays steady and sure. “Turns out, he slept with some random. I was so upset and disappointed, but I wasn’t surprised. I told him that he needed to be either with just me, or not me at all. Then he turned the whole thing on me, calling me crazy and saying, ‘We were fine until you got all weird on me.’ But I could tell by the way he’d broken the news to me that he knew I’d be upset. I was embarrassed that he chose to have sex with someone else when I know he liked having sex with me. But the worst part was that I felt so brokenhearted about it---and so dumb about feeling so brokenhearted.”


Are Millennials Really So Different?

Again and again, I talk with young adults whose actions don’t line up with their stated intentions, desires, and beliefs. They seem to have difficulty quieting the outer noise, tuning into their inner values, beliefs, and emotions, and using that awareness to guide their behavior in their intimate relationships. In other words, they’re loving out of alignment.

When I ask the students in my class how they’d like their relationships to unfold, their preferred narrative goes something like this: we hang out as friends, get close over a period of months, and then once there’s trust and closeness, we start having a sexual relationship. I suspect it indicates that young adults are craving some safety to balance their adventure.

Meanwhile, hookup culture continues to thrive, even though most therapists would love to see young adults create something more fulfilling than ambiguous, drunken, unsatisfying sex. Here’s the problem, though: today’s college students tend to be awfully compliant when it comes to hookup culture, and I find myself wondering why. Is it that as a culture we no longer encourage young people to question the status quo? With our cultural insistence on a narrow and meritocratic path to success, it feels awfully unfair to expect young adults to manifest romantic coherence when our culture seems to reflect back to them anything but.

Unless you’re working at a college counseling center---or happen to have learned more personal lessons about the struggles of Millennials in your own family---the world of hookup culture may seem a bit like a foreign country, filled with strange and sometimes off-putting customs. At this point, most Millennials don’t have the income or the inclination to frequent our offices or engage in the custom of regular psychotherapy appointments, which may seem strange and archaic to many of them. But one thing is certain: in the coming years, therapists will be getting an increasingly close-up look at the long-term consequences of what it meant to learn about the possibilities of love and commitment at a time when technology and changing cultural norms were transforming the way young people connected with each other. Whatever changes lie ahead in our cultural rituals for coming-of-age relationally, we’ll be seeing in our therapy practices the emotional legacy of hookup culture, in all its rawness and frantic incoherence, for many years to come.


Do you have clients who are single, dating, or single-again? 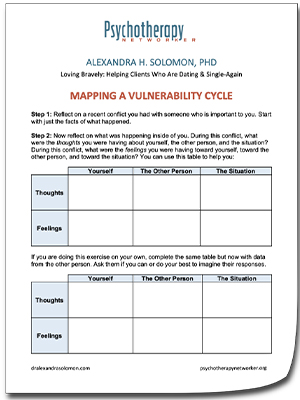 Download the free worksheet and then watch the video where Dr. Solomon provides step-by-step guidance on how to use the Vulnerability Cycle worksheet by demonstrating a typical relationship case scenario.

Use this effective and practical, printalbe FREE tool to use with your clients today!

GET STARTED FOR $159.99
Meet the Expert:
Alexandra H. Solomon, PhD, is staff clinical psychologist, member of the teaching faculty in the marriage and family therapy graduate program, and clinical assistant professor of psychology at The Family Institute at Northwestern University. In addition to her clinical work with couples and individuals, Solomon teaches graduate and undergraduate students. One of her courses is Northwestern University’s internationally renowned “Building Loving and Lasting Relationships: Marriage 101,” which combines traditional and experiential learning to educate students about key relational issues like intimacy, sex, conflict, acceptance, and forgiveness.

Solomon’s work has been widely cited, and her articles on love and marriage have appeared in The Handbook of Clinical Psychology, The Handbook of Couple Therapy, Family Process, Psychotherapy Networker, and other top publications in psychology. Her work also appears in O Magazine and The Huffington Post, and she is a frequent interviewee and contributor for the Oprah Winfrey Network, Yahoo! Health, The Atlantic, CBS Early Show, NPR, Psychology Today, and WGN Morning News. She is a sought-after speaker for corporate, collegiate, and professional audiences on topics related to modern love.

Learn more about her educational products, including upcoming live seminars, by clicking here.