A Trip to Cuba: A view of the island from the eyes of Christina Taylor, PhD 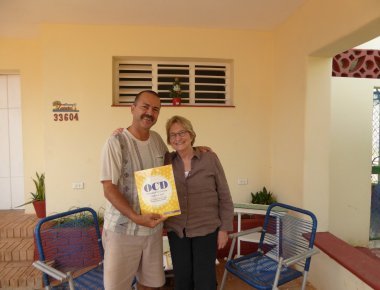 From the desk of PESI author Christina J. Taylor, Ph.D., pictured above with the President of the Cuban Society of Psychology, Dr. Alexis Lorenzo Ruiz.
For many of us of a certain age who lived through the Bay of Pigs invasion, the Cuban missile crisis, and the trade and travel embargo, the island of Cuba, only 90 miles away from US shores, has for too long been an intriguingly unavailable neighbor. As a psychology resident on staff at the mental health center in Key West, Florida in the early 90s, my interest in Cuba was piqued by work with Cuban-American exiles who brought their vibrant Cuban culture to our most southern American city. This past March - three weeks before Obama in fact – my dream of visiting Cuba came true on a tour focused on birding, people, and cultural exchange.

It was a completely fascinating and sometimes very difficult trip; conditions in the hotels in the countryside falling well below standards that would be considered budget lodging in the US. Sadly, the island is in a state of decay, buildings standing vacant and in disrepair. A formerly grand home, that is now a resort near a magnificent nature preserve, was reminiscent of Miss Havisham’s run down mansion in Dickens’ novel Great Expectations. The shower in our bathroom with the exposed light bulb, provided barely a trickle of cold water, necessitating creative maneuvering to get at least nominally washed and rinsed.

The Cuban people, on the other hand, possess an indomitable spirit in the face of truly difficult economic conditions. They engage in what our young Cuban guide called the struggle to make ends meet. While the average Cuban salary is about $24 a month, he explained that it really takes 10 times that amount to meet basic needs. Hence the need to find additional sources of income – alluding to making do by struggling to find jobs that pay under the table. If possible, many people seek out employment in the tourist industry – one cab driver explained that although he possessed a college degree in mechanical engineering, he could make more money in two hours driving a taxi than in one month working as an engineer. The irony is that there is free education, including up to the level of a Ph.D., for those who are qualified, but the downside is that there are many obstacles to earning an adequate income.

The deprivation that the Cubans are experiencing now is still not as bad as in the 1990’s following the collapse of the Soviet Union and the withdrawal of its economic support. Our guide told us that the average Cuban lost 30% of their body weight during that time because of severe food shortages. Fidel Castro labeled this period “the special period” because of the hardships faced by the Cuban nation. Food is certainly more plentiful now, but again, the restaurant quality in the countryside is generally not up to American standards. Stray cats and dogs are seen everywhere – sometimes to the point of their ribs showing through – leading some of us on the tour to regularly drop food onto the floor for them and to surreptitiously wrap up part of our meals for feeding other stray animals.

The long history of economic difficulties and hardships definitely accounts for why the Cuban people are so enthusiastic about the renewal of relations with the US. Everywhere we went, Cubans who initially thought we were Canadian, broke out into big, big smiles when they learned we were Americans. It is clear that they believe the normalization of relations with the US will have a positive effect on their lives.

To this point, people in the travel industry wore a pin with adjoining Cuban and American flags, and many taxi drivers displayed both flags on the dashboard of their vintage American cars. The cars are, of course, a hoot for all of us, especially for us baby boomers who rode around in them with our parents in the 50’s and 60’s. It was incredible to ride in a 1938 Oldsmobile that appeared to be right out of a Hollywood gangster movie, sans the tommy guns, of course! I also spoke to the owner of a 1958 yellow Rambler exactly like my father’s who told me that he had installed a Russian engine to keep it going. That is a testament to the ingenuity and perseverance of a people who have surmounted great obstacles. To this point, the drivers are excellent, adept, and by far more polite than those in the US! And for those who want to travel more frugally, cheaper taxi fares can be had by riding in the less glamorous non-vintage cars! And forget about seat belts and emission controls!

Despite the decay, pollution, deprivation (internet service is extremely scarce – available in some hotel lobbies for $4.50 an hour) and all the physical and social rehabilitation that needs to be done, Cuba is surreally enchanting. It is both weird and tranquil to look out over Havana harbor and see no boats except for one Russian cruise ship parked at a dock. And by the way, not one seagull! Outside of Havana, horse drawn carts are common and oxen are used to plough the fields.

Music is everywhere and marvelous. Even in the small restaurants and hotels in the countryside, the local bands and singers serenaded us with the beat and sounds of salsa. The live music that reverberates all throughout the country is an anthem to the passion and soulfulness of a people who have endured.

As an American, I am hopeful that the renewal of relations between the countries will be positive for both peoples. The Americans I encountered in Cuba all expressed gratitude that we had the opportunity to visit the island before the anticipated onslaught of American tourists. Most expressed reservations about the negative effects that mass American tourism may have on this island nation stuck in time. Hopefully, the transition unfolding before us will work out in the end for both Cuba and the US. It is inevitable that something will be lost and gained.

At the end of my tour I had the opportunity to meet with the President of the Cuban Society of Psychology, Dr. Alexis Lorenzo Ruiz. I was able to contact him prior to my trip about my wish to meet and to share with him my recently published book on OCD. With that, he cordially invited me to meet him in his home (his day off from campus at the University of Havana).

We spent an hour and a half together talking about our respective careers and work as psychologists, finding out that we shared many commonalities. He has a background in social and clinical psychology, which I do as well. We both teach courses in Psychopathology and he is currently authoring a book on Psychopathology. Dr. Ruiz is a trauma specialist and knowledgeable about current evidence based treatments, including cognitive behavior therapy (CBT), Exposure and Response Prevention, and Acceptance and Commitment therapy (ACT). He spoke about the epidemiology of OCD, the importance of using ERP for treating OCD, and cited a case of a young man whose treatment was complicated by a co-morbid condition. He was truly delighted to receive my book as well as the one I donated to the University.

Dr. Ruiz was trained as a psychologist in the Soviet Union and speaks several languages. Following the Chernobyl disaster, he spent significant time in the Ukraine treating people suffering trauma from the disaster. His English has suffered as a result of his multi-linguistic experiences, and he is now interested in finding a post-doctoral position in the USA to perfect his English language skills. His lovely daughter, who is studying to become a physician, served as our translator. He is a brilliant, knowledgeable, and warm man who welcomed me into his home despite his busy schedule – working to finish his book by June! At his home, I met his two daughters, Aleli and Azucena, their grandmothers, and their new puppy, Lassie! His wife, Alma, is a physician and was away at work.