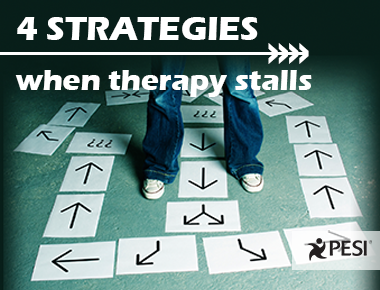 Counselor Courtney Armstrong explains what can cause therapy to stall and offers 4 simple strategies for getting a client moving again when they have got stuck.

What do you do when a client stops making progress in therapy and it seems like your sessions are going nowhere? There are many reasons why this can happen including fear of change, unresolved trauma or a lack of clarity between client and therapist on the goals for therapy. In this article I will share 4 strategies that not only dissolve standstills, but can also trigger big breakthroughs for your clients.

Please note: all client names have been changed to maintain confidentiality.

Strategy #1: Respectfully Address the Impasse and Normalize Fears of Change

Although clients seek therapy to make changes in their lives, the act of making those changes can seem scary or daunting. For example, my client Susie initiated therapy because she kept getting into relationships with men who had addictions. When she contacted me she was in an extremely codependent relationship and said she wanted to gain the courage to get out of it and build her self-esteem.

Susie actively participated in our first few sessions and showed a great deal of insight. Around our 4th session, she felt her self-esteem had greatly improved. Yet, she still couldn’t bring herself to break off the dysfunctional relationship with her boyfriend, who had recently stolen money from her and wrecked her car while driving drunk.

In the next several sessions Susie seemed to just want to complain about the emotional and financial burden this relationship placed on her. She dodged my best efforts to explore her deeper fears with replies like:

“Oh, I am planning on ending this relationship and setting boundaries like we talked about. I just can’t do it right now because he is dealing with the DUI and all. I’ll wait and do it after we get all of that resolved.”

Then, she’d go back to complaining about her frustrations with him.

When I found myself feeling bored and exasperated in our sessions, I knew I had to be more direct. I said:

“Susie, I feel like our last few sessions have degraded into focusing on all the ways you are unhappy in this relationship. But, that’s not going to lead you out of this dilemma. We’ve got to look at the fear and guilt that’s holding you in this pattern if you want to get any relief from it. Can we focus on that for a minute?”

“I know. I guess I’m scared that either he’ll die if I don’t help him or that I won’t find anyone else to love me if I leave this relationship.”

This led to a much richer session in which Susie revealed an attachment trauma with her father who was a recovering alcoholic. Prior to this, she’d never disclosed that her father had a drinking problem. At the end of the session, she thanked me for redirecting her and asked that I continue to keep her accountable if she lost focus in the session.

Just as Susie revealed, internal conflicts about change are often rooted in a prior emotional trauma the client has experienced. The problem is that many clients won’t connect these prior experiences to their current problem. Susie discovered this connection when I asked her if her feelings of guilt and fear around setting limits with her boyfriend reminded her of any other relationships in her life. It took a few minutes, but her eyes widened as she recalled an incident from her childhood when her father came home inebriated and her mother asked him to leave. Susie said her father went into a tirade and told her mother:

“Fine I’ll leave. But no one will ever love you and Susie like I do.”

He got into a car accident that night and suffered a head injury that left him in a coma for several days.

Although he survived, Susie thought her father was going to die and continued to fear for his life any time he started drinking. He eventually stopped drinking and they have a pretty good relationship now, which is why she’d never consciously connected her relationship with her father to her current relationship problems.

Susie realized she’d inadvertently acquired the belief at a young age that that she and her mother should put up with her father’s drinking so “he wouldn’t die” and because “nobody would ever love them like he did.” Once we were able to reprocess this memory and these associated beliefs, she felt much less compelled to accommodate her boyfriend’s drinking and made headway in stopping her codependent patterns.

Strategy #3: Consider the Downside of Being Free of the Problem

Sometimes being free of a problem creates a host of other new problems. For example, when I asked one of my clients who struggled with recurrent depression and chronic fatigue what the downside would be to feeling content and having more energy, she realized that her family would make more demands of her if she wasn’t chronically tired and depressed. She said the only time she ever felt like it was okay to rest and take a break was when she was sick.

Similarly, another client who suffered horrific physical abuse as a child discovered that his pattern of depression and underachievement was his way of holding his father accountable. He commented:

“Damn. I hate to say it, but if I’m successful and happy, then my father will continue to think he did a great job as a parent. Being a screw-up is my passive-aggressive way of punishing him for how he treated us. I know that sounds crazy, but I think that’s why I always stop short of achieving success in anything I do. Whenever I achieved anything as a kid, like making the All-Star baseball team, he took credit for it. I don’t want to give him that satisfaction.”

Another example in this category could be a person in an unhappy marriage with children. As miserable as they may be in the relationship, the thought of leaving the relationship, moving house, managing all the financial stressors, and upsetting the children seems worse than staying with the “devil they know.”

In all of these cases, it takes much more time and preparation to determine a feasible long-term goal. Therapy sessions may be better suited to assisting the client in achieving small goals that make their living situation more tolerable until they are in a position to make a bigger life change.

Strategy #4: Clarify That You and Your Client Are In Agreement on Desired Goals

Therapists are generally well-intentioned and seek to help clients move toward what is in their best interest. But, if the client doesn’t agree with the therapist’s intentions for the sessions, therapy is likely to go nowhere. This discordance between the client’s agenda and the therapist’s is not always obvious or clearly stated. The client’s nonverbal cues will let you know if you’ve hit on an appealing goal that triggers his or her motivation.

For instance, I worked with Saundra who said she wanted me to assist her in better managing stress at work. She had lost her temper a couple of times on the job and had been given a written warning. I noticed that when we were exploring ways she could center herself and adjust how she was approaching work tasks, her motivation seemed superficial at best. I commented:

“Saundra, I can tell these goals aren’t really lighting you up, so I think there must be something else I’m missing. What is more important to you than your job? What would being less stressed at work enable you to do?”

Saundra began to cry and said:

“My kids! I want to be able to come home and enjoy being with my children. I hate coming home in a bad mood every night and I resent my company for making us work more and more hours.”

Aha! This was the real source of Saundra’s angry outbursts at work. She felt like her job was taking away time with her children. When we centered our therapy on creating more space and time for her kids while balancing demands at work, she progressed quickly.

In sum, when therapy stalls, it is usually because there is an internal conflict about making a change or about realizing the goal itself. The first step is to acknowledge to the client that you are aware things aren’t moving forward for them and ask them what they think might be causing the problem. If you sense they feel apprehensive about making a change, reassure them this is normal and invite them to give voice to their fears.

Second, explore for any earlier experiences that may be contributing to the current pattern they want to change. Even when a person knows a certain belief, behavior, or relationship pattern is irrational; his subconscious, emotional brain will sustain patterns that seemed to work in the past until he has a new emotional experience that changes the pattern.

Third, invite the client to consider what the downside of achieving their goals might be. Again, clients may not be consciously aware of possible drawbacks until you give them a safe place to look at them.

Last, make sure that you and your client have the same goals and agendas for therapy. Clients often look to the therapist to set the goals for a session and may not feel comfortable voicing their hesitation about moving forward. Furthermore, they may not even understand why they lack the motivation to follow through and blame themselves for falling short of their goals. You can avoid this by reading the client’s body language, which will instantly let you know when you’ve hit on a goal that really motivates them. When you’re in the zone of a viable, appealing goal, the client will be more animated, her facial expressions will broaden, and she’ll be more enthusiastic in her participation. If you’re not seeing these signs, then ask your client:

“What else do I need to understand? What am I missing? What would be the best thing that could come out of these sessions?”

They’ll tell you. All you have to do is ask and give them a safe place to tell their truth.
Courtney Armstrong, LPC, MHSP, is a licensed professional counselor in Chattanooga, Tenn., and the author of “The Therapeutic ‘Aha!’: 10 Strategies for Getting Your Clients Unstuck.” She also offers training and free resources for therapists at her website: www.courtneyarmstrong.net.