Shedding Light on the DSM-5®: The View from the Trenches 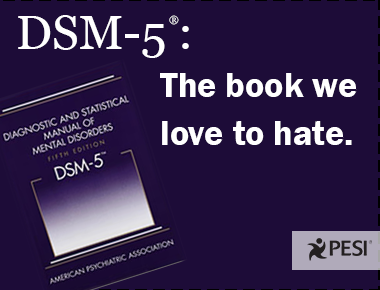 Since the release of DSM-5® in the spring of 2013, its critics have complained that the definitions in the new edition are now too broad, too inclusive (or not inclusive enough), too biological (or not biological enough), too vague, too quixotic, too unscientific, too much under the thumb of Big Pharma—the list goes on. However, we’ll have to make friends with DSM-5, particularly if we expect insurance companies to go on reimbursing us. But how are ordinary clinicians across the country adapting to the specifics of the new manual? As someone who’s given dozens of workshops on DSM-5 and trained thousands of therapists in its use, I’ve had a front-row seat on how psychotherapists have reacted to the changes it means for their practice.

Overall, most of the participants in my workshops seem to feel that the diagnostic system in the DSM-IV was handy and working just fine for them. They know the DSM-5 Task Force claims changes were made to reflect new research in mental health care, but as one participant remarked, “It’s like the people on the Task Force have never sat in the room with a client. They’re up in an ivory tower somewhere, dictating how we should be diagnosing our clients, but the changes they’ve made don’t match up with what I see in my office with real people.”

Another psychologist expressed it like this: “My concern is helping the person sitting in front of me. Their priority seems to be related to the World Health Organization and the International Classification of Diseases system. I’m not dealing with abstract concepts. I’m dealing with real hurting people, people who struggle.”

Without a doubt, the subject that arouses the most passionate response in my workshops is when we talk about the loss of the multiaxial system, which used to split a diagnostic impression into five parts. Using the five axes, the evaluation of every patient documented clinical concerns leading to treatment; mental retardation and personality disorders; contributing psychosocial, environmental, and medical conditions; and a global assessment of functioning.

Clinicians believe that losing the five axes means losing the ability to paint a more complete picture of what’s going on with the people they treat, which runs counter to our field’s new focus on integrating medical and behavioral health care.

I share some of these concerns. The DSM-5 model of diagnosing leaves us with only a listing of the diagnoses, as opposed to the multiaxial system, which gave us a shorthand way to capture a fuller image of a client. Now, it seems it’ll be much more difficult to adhere to the wise adage that we should be more concerned with the person who has the condition than with the condition the person has.

Another change in the manual that consistently stirs up spirited disapproval is the loss of Asperger’s disorder as a diagnostic category. Now considered part of autism spectrum disorder, the term Asperger’s doesn’t even appear in the new manual. I have yet to have a single workshop participant praise this change.

People with Asperger’s, parents of children with Asperger’s, and autism and Asperger’s advocacy groups have all voiced their objections as well. They see Asperger’s as a different condition from autism, and they disagree with the decision to eliminate it as a separate disorder. In addition, they’re concerned that people with a DSM-IV diagnosis of Asperger’s won’t continue to qualify for supportive services. The DSM-5 Task Force has said that most people with a well-established DSM-IV diagnosis of Asperger’s should meet the criteria for autism spectrum disorder in the DSM-5. If they don’t, clinicians are supposed to evaluate them for social (pragmatic) communication disorder. Of course, this response from the Task Force has done little to allay the concerns of people with Asperger’s and their advocates, and I’m sure this controversy will continue to gather force.

People inevitably raise their hands as they flip through the handouts and say, “I don’t see where sexual addiction and pornography addiction are in the manual. Can you show me?” My answer is no, because those conditions aren’t in the manual. When I say this, there’s usually a collective gasp of dismay, which only grows louder when I add that gambling is the only “behavioral addiction” listed. What’s more, sexual and pornography addictions aren’t even in the section on conditions needing further study, which is often where things go before they make the cut and become official diagnoses in some future revision.

Although people have clearly voiced criticisms of the new manual, one change that’s regularly viewed with great approval is the move from using the old Global Assessment of Functioning scale to new severity scales that are specific to different diagnoses. Clinicians applaud the idea of having separate and unique severity scales for anorexia, bulimia, substance-use disorders, oppositional defiant disorder, and other conditions.

They also approve of the new symptom cluster for post-traumatic stress disorder (PTSD). This new symptom cluster, which comprises negative alterations in mood and cognitions, was added to the original three clusters from DSM-IV: reexperiencing, avoidance, and increased arousal. Some of the new features of the negative cognitions include persistent, distorted self-blame, persistent negative emotional state, feeling detached and estranged, and persistent inability to experience positive emotions. Clinicians feel that the emphasis on these cognitive changes better reflect ways that people with PTSD often feel most affected by their trauma exposure.

Changes in the language of gender dysphoria also seem to reflect positive movement toward a more open, inclusive point of view. The current wording in DSM-5—“some alternative gender”—indicates that we’re now thinking of gender as falling along a continuum, rather than being divided between two qualitatively different sexes. This change reflects major social and cultural shifts in the United States.

The Impact on Therapy

Except for a surprisingly modest number of genuinely significant changes, including the newly introduced dimensional scales, DSM-5 is still clearly the offspring of DSM-IV. It’s most definitely not a radical departure for psychiatric diagnosis, much less a revolution.

The changes in the manual won’t be critical for doing therapy; most therapists seek to understand how and why clients are troubled before they try to pin them to DSM diagnoses anyway. But the new manual will make a big difference procedurally and bureaucratically.

To get paid, therapists will need to rethink how they define and document their clients’ problems according to the template DSM-5 has set before them.

Further, there will be rumblings throughout the pharmaceutical companies, since changes in diagnostic practice notoriously tend to precede an increase in the sale of drugs to newly diagnosed populations.

Certainly, DSM is the book we love to hate. And yet, what else is there? Until we have some huge breakthroughs in neurophysiological research explaining what happens neuron-by-neuron to cause mental disorders, our lumbering mental health enterprise needs a common system of diagnostic categories simply so we can talk coherently to each other about our clients. That being the case, DSM-5 isn’t really all that bad.
Learn more about Using the DSM-5® and ICD-10: The Changing Diagnosis of Mental Disorders.
This post is based on an article originally brought to life by our partner, Psychotherapy Networker.

The full article, “Shedding Light on the DSM-5,” written by Martha Teater, appeared in the March/April 2014 issue of Psychotherapy Networker magazine.