10 Types of Touch That Can Happen in Therapy 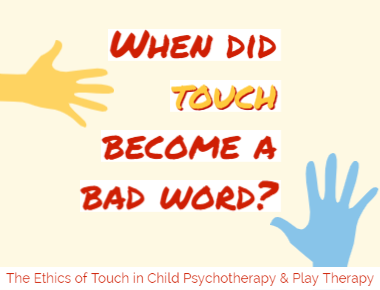 In the 13th century, the Holy Roman Emperor Frederick II took 50 infants from their mothers and placed them with foster mothers. The foster mothers were instructed to feed and bathe the children, but not to touch, speak or interact with them in any other way. While his experiment was intended to discover what natural language the infants would speak, Frederick II would never find his answer because the children perished: unable to live and thrive without the clapping of hands and interaction of touch.

It should come as no surprise how crucial touch is to our development. It is the first sense that we develop in the womb, and the last sense we use before death. Knowing touch is the foundation of human experience and that it is essential for healthy growth and development, we need to pause and ask ourselves... When did touch become a bad word?

No touch rules were instituted to try to stop sexual abuse of children. These rules, while well intended, placed additional pressure on therapists, and started a new ethical battle.
Today, there are many ways you can include touch in therapy sessions while maintaining your ethical standing. Here's a list of 10 types of touch identified by Janet Courtney that can happen during therapy if deemed developmentally appropriate.

Want more training on the ethics of touch? We invite you to learn more with Janet Courtney's Ethics of Touch in Child Psychotherapy & Play Therapy DVD.


Before you leave, watch this TED talk from Janet Courtney on the Curative Touch of a Magic Rainbow Hug.