How About Some Botox for Depression? 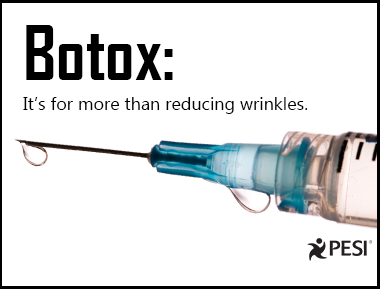 Botox, botulinum toxin A, has certainly been on a run in recent years—spreading its wings way beyond its use as an anti-aging treatment. Known primarily for the ability to reduce the appearance of some facial wrinkles, Botox injections are also used to treat such problems as repetitive neck spasms, excessive sweating and overactive bladder. Botox injections may also help prevent chronic migraines in some people.

Now a new study has found that when Botox is injected between the eyebrows, it delivers an antidepressant effect. Researchers at the University of Texas Southwestern conducted a 24-week randomized, double-blind, placebo controlled study that included 30 subjects (93% women in the study) with major depressive disorder. At week 12, the Botox and placebo groups crossed over. That is, those receiving Botox were instead delivered placebo; those getting placebo were then administered Botox.

The subjects who received Botox from the outset or at week 12 had a statistically significant reduction in depressive symptoms compared to those getting placebo. Interestingly, depressive symptoms continued to decline over the full 24-week period after a single Botox injection, while the anti-aging improvements had ceased at the 12–16 week mark.

What’s behind Botox’s antidepressant properties? We don’t know for sure, but it is suspected that Botox’s antidepressant effect is “cosmetically” driven, providing an esteem and image boost which in turn improves personal fulfillment. Another possibility is that positive feedback to a happier looking face received from the Botox user’s social network provides a sustainable emotional boost. A final suggestion is that the facial muscles communicate with the brain and the act of frowning adversely affects neurotransmission; whereas smiling activates nerve impulses.This post is an excerpt from Psychopharmacology: Straight Talk on Mental Health Medications, Third Edition, by Joe Wegmann, RPh, LCSW.