Beyond Chemistry: Exploring Our Relationship with Our Meds 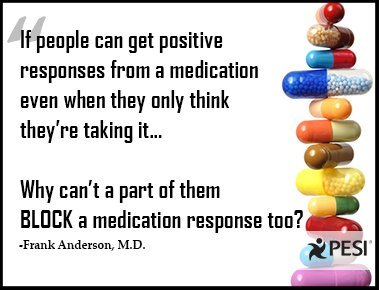 The clients referred to me for psychopharmacology consultation often seem to feel a certain relief once they've let me know that, when it comes to meds, they've tried "everything" and so far "nothing" has worked. After we've run down the list of what they've taken and how it's failed, they sit back as if to say, "Now it's your turn." What else is there for them to say?

Here's where I explain that I work a bit differently than most prescribers. I believe that the chemical effect of pills is only part of their impact. I emphasize that for some people, more may be riding on this relationship with medication, the source of so much hope and potential disappointment, than on any other relationship in their life. Understandably, this notion gives many people pause; they're not used to considering the chemical agents in their daily lives to be like a living, breathing psychological presence in their minds, whether conscious or not.

But then I say something that's often even more startling to them: I don't prescribe medications to a person unless all the inner parts of that person are on board with the decision to take them. If they have doubts or fears about meds and their possible impact, I tell them that we need to focus on the root of these feelings, not just go through the motions of a standard med check.

I then suggest that we try to get to know the different thoughts and feelings they might be having about taking a medication for anxiety. This invitation to look at their relationship with their medications is rarely, if ever, part of a dialogue with a prescriber, but it's often not even brought up by therapists, the people who should be inquiring most about the important relationships in their clients' lives.

Why this huge chasm between psychology and psychopharmacology?

Typically, I find that therapists are reluctant to get involved in the prescribing process, viewing the subject as beyond their scope of knowledge and professional expertise. Others reject medications as a legitimate form of treatment, turned off by the excesses of Big Pharma and disdainful of the idea of a quick fix for the complex psychological issues a client needs to sort out in treatment.

On the other side, psychiatrists and primary-care physicians often have just 15 minutes with patients and feel the constant pressure to do something to justify insurance reimbursement for the office visit or for another day in the hospital.

How can we bridge this gap?

One step is for therapists to understand that bringing the same internal curiosity and focus to psychopharmacology with clients that they would when addressing any other clinical issue in therapy encourages compliance, increases the effectiveness of meds, and deepens and strengthens the treatment. Another step is for prescribers to acknowledge that unresolved psychological issues around people's strong, largely unacknowledged feelings toward the drugs they're prescribed regularly interfere with the physiological impact of those drugs.

As both a prescriber and a therapist, I do much of my work using the Internal Family Systems (IFS) model of therapy. I help my clients clarify the relationships between themselves and their internal parts-the various aspects of them that may hold entirely different emotional positions about the issues in their lives, including taking psychiatric medications. Engaging different parts within the client's own psyche about meds—their usefulness, desirability, side effects, unintended consequences, and so on—helps them tune into their own mental/physical system in a deeper, more focused way.

Often, I've found that simply acknowledging and thereby validating these types of feelings can be enough to alter a physiological response to medications. Indeed, I invite any skeptics to consider the placebo effect.

If people can get positive responses from a medication even when they only think they're taking it, why can't a part of them block a medication response too?

Another important step is to help clients differentiate symptoms from feelings. When I ask clients how they think a medication can be helpful, they say something like, "I don't want to feel sad all the time," or "I'm tired of being so lonely," or "I want to be less angry with my kids." I then explain that these are feelings, and medications are intended to treat symptoms, not feelings.

Symptoms include panic, depression, inability to concentrate, irritability, and insomnia, whereas feelings include sadness, loneliness, anger, and distress. Generally, symptoms are biologically based, and feelings are psychologically mediated. Also, symptoms tend to affect the whole system-in contrast to feelings, which tend to encompass a specific part of the inner self experiencing a specific emotion for a particular reason.

Of course, symptoms frequently cause uncomfortable feelings, and psychological issues often trigger biological responses. The task at hand, then, is to determine how much of a client's experience is psychological and needs to be worked out in therapy, and how much is biological and might be appropriately addressed with medication. Usually, it's not one or the other, but a combination of both.

When asked, however, clients can often differentiate how much of each is at play. Sue, for instance, a college freshman who came to see me because she was struggling in school, was able to say after checking inside, "I think 80 percent of my struggling is due to being away from home and missing my family, but 20 percent feels like depression." Clearly, Sue identified her feelings in missing her family, and her symptoms in describing depression.

My approach with medications rests on one basic principle: I educate clients about meds, but they must decide whether or not to take them. In other words, although I can explain which are most appropriate and their possible side effects, it's up to my clients to decide with the full awareness of all their thoughts and feelings about taking the medication.

Too often, when medication is prescribed, therapists assume that the job is done and therapy can proceed. In this way, it's as if the client had just been vaccinated and doesn't have to worry about the onset of untoward symptoms.

The reality, however, is that beginning meds is just the first step in the ongoing work of psychopharmacology, which also involves helping clients stay attuned to their reactions and assessing the effects of medications so that they're better able to express what's going on with them during their follow-up appointments with their prescriber.

Clients are certainly not the only ones who have reactions and feelings about taking medications. I can also get emotionally triggered or feel as if I've failed when a medication doesn't work and the client gets frustrated with me. Sure, my inner helper likes it when my clients feel better, but like a lot of therapists, I often struggle with suggesting a medication trial. At times, I've agreed too readily with a client's request for medications.

Dan, whom I was seeing for both therapy and medication management, came to our session asking for an antidepressant for what he described as increasing depression over the previous month. The progress we'd made over a few years of therapy was reassuring, and I'd come to look forward to seeing his name on my schedule each week. He had been on medication in the past with good success, so without much hesitation or my own inner 30-second check-in, I quickly agreed. Dan left feeling hopeful, but over the next several weeks, he came into sessions complaining of being numb and disconnected. Was the medication not working, did he need a higher dose, or was something else going on? That's when I got curious.

"Dan, can you check inside to see if you have any feelings or reactions to being on this medication?" I asked.

He took a few moments and then said, "All I feel is numb. I've got no feelings and no thoughts." I asked him to check inside again to see if his "gut" told him to increase or stop the medication. He was somewhat surprised by the answer that welled up. "I think it makes more sense to stop the medication," he said. "I've actually been feeling worse ever since I started it."

It was at that moment that I realized I hadn't been sufficiently curious about why Dan wanted to begin retaking medication, and I didn't take the time to explore what was going on for him at the time. In exploring what had precipitated his desire to start taking meds again, he told me that he'd just learned that his sister's cancer had come back and that the prognosis was grim. What he'd misinterpreted as depression was really an attempt to numb out and avoid feelings of fear and grief. It turned out that we were medicating a psychologically protective response in him, not a biologically based depression. Dan's parts that didn't want to feel, and my parts that wanted to be liked, got in the way of effective treatment, and lead to me prescribing an unwarranted medication.

Too often therapists don't talk about meds with either clients or prescribers because they fear treading into areas that are beyond their field of expertise. An important part of therapy with clients taking medications is regularly asking them about their responses—both mind and body—to the full impact of medication, before, during, and after the time they're taking them. Ongoing discussion about clients' relationships with their meds should be as integral to therapy as other important dimensions of their lives, such as their family situation, troubles with work, personal triumphs or failings, or any other issues that generate intense feelings and shape their day-to-day existence.

Asking and listening are essential to making sure that psychotherapy supports the work of psychopharmacology. Asking means inquiring about clients' thoughts and feelings around taking medications, and listening means helping them check in with their internal reactions, exploring any conflicts that arise. For the therapist, there's also listening to your own reactions and feelings about medications. All are part of the all-too-often shadowy world that lies at the interface of psychotherapy and psychopharmacology. By acknowledging this territory, as with other charged issues, psychotherapists can help clients give voice to their complex emotional responses to taking meds, even if they feel the neuroscience and biochemistry of medication lie beyond their expertise. After all, even without a medical degree, therapists know quite a bit about how to handle a troubled relationship when they see one.

This post is based on an article originally brought to life by our partner, Psychotherapy Networker.

The full article, “Beyond Chemistry,” written by Frank Anderson, M.D., appeared in the Jul/Aug 2014 issue of Psychotherapy Networker magazine.