Exploring the Roots of Passive-Aggression 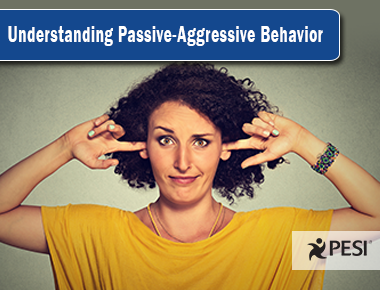 There are two roots:

I probably sound like your typical anger management therapist when I say this, but it's true: our childhood experiences impact the way we view the world and how we respond to present day situations. As children, while our physical selves grew and took shape, our psychological selves did, too. The framework you use to judge situations and make decisions as an adult were formed when you were young. For instance, if you were taught to bottle up your anger or you saw your parents bottle theirs up, you may now believe that anger is bad and not an emotion that you should talk about, let alone feel. Or maybe the anger you witnessed as a child terrified you—it was violent or seemed out of control—and so you now believe that any expression of anger will lead to terrible outcomes.

When irrational beliefs created in childhood determine your adult behavior, you may find that your mind and its thoughts are your own worst enemy. For example, if you believe you're unattractive because that's what you were told as a child, now, as an adult, when someone pays you a compliment, you are likely to respond negatively. In your mind your belief that you're unattractive has transformed into a fact. Therefore, when someone says something nice about the way you look, you will automatically assume they're being condescending, playing a trick on you, or just lying.

The thing is, feelings and facts aren't the same thing. When we confuse the two, we live in a world colored by our childhood traumas and negative self-image rather than by what's true.

Anger isn't the only feeling we learn to fear as children. Kids who grow up in the United States are taught from a young age that they should act optimistic and cheerful and that expressing, or even feeling, many of our other natural, human emotions—like anger, sadness, and fear—is bad. We're told, "Big girls (and boys) don't cry." This is so ingrained in us from such a young age that it shocks us to see people from other cultures outwardly express their emotions. Scenes of mourners wailing loudly when someone dies seems bizarre to those of us who grew up in a culture where at a funeral one is supposed to delicately dab at their eyes.

In the U.S., we cut ourselves off from painful and uncomfortable feelings, and we try our best to act like the serene, positive people we're supposed to be. We see those who act "appropriately"—meaning unemotionally—rewarded and those who act "inappropriately"—meaning emotionally—denigrated. Would you rather someone call you a "worrywart" or "poised"? What's better, to be "high-strung" or "easy-going"? Insults like "worrywart" and "high-strung" reinforce the idea that feeling fear—anxiety is a form of fear—is inherently bad. Women are especially victims of this anti-emotion cultural bias ("stop acting so emotional," "you're acting hysterical"­) when they display even the slightest bit of anger or sadness. What's actually bad is labeling an emotion "good" or "bad" or suggesting that emotions themselves are bad.

When we learn from our parents or our culture that certain emotions are bad, we cut ourselves off not just from these emotions, but all emotions.

Bottling our anger, or fear, or sadness, lessens our ability to feel love, joy, affection, and satisfaction.

We become so disconnected from our emotions that we don't know what we really feel, and we then communicate only our thoughts—often irrational thoughts—about how we should feel or believe we feel. It's only when we learn to recognize our irrational thoughts (e.g. "there's no way that compliment was genuine"), and can identify when we're getting our social cues from our culture rather than truths of human behavior (funerals are sad and crying is the body's natural response to sad feelings!), that we can begin to free ourselves of passive-aggressiveness. If you want to learn more about passive-aggressive behavior, please visit my website at abrandtherapy.com, follow me on Facebook and Twitter, sign up for my newsletter, or join me at one of my upcoming mindful anger workshops.