Working with Teens Without Nagging 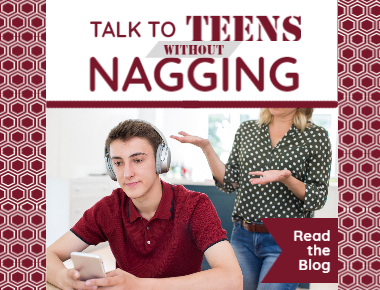 Tired of ‘nagging’ without success? Tips for disarming pushback and negativity

If there’s one thing that bugs teens about their parents, it’s nagging. While teens with ADHD often need reminders to start something, they often resist whatever you say, no matter how you say it. Quickly, tempers flare and arguments ensue about the fact that you gave them a nudge at all while the actual task remains uncompleted. At other times, your son or daughter acknowledges what you said but just doesn’t feel like doing anything. What else can you do?

Start with your compassion. Throughout their lives, kids with ADHD hear many comments about what they could be doing differently, i.e better. They’ve learned to expect criticism and many kids have told me that they don’t believe in ‘positive feedback.’ Over time, these frequent suggestions or admonitions about their behavior, emotions or social relationships become internalized into a persistent loop of negative feedback they give themselves. It lowers their self-esteem and affects their sense of competency in the world--whether they show this to you or not. It also colors their relationship with you. While sometimes they don’t do what you ask because it’s tedious or unpleasant, sometimes they just want to avoid the tough stuff and exert control over one area of their lives. This means saying ‘NO’ to you.

With this awareness in mind, remember that family conflict upsets everybody. Your son or daughter dislikes the arguments and tension as much as you do. This is their incentive to cooperate and how you can entice them to participate. Sit down during a calm moment and ask them how they would like to be reminded of stuff and what ideas they have about your responses from you when they don’t cooperate. This puts the ball back in their court and gives them some appropriate input. You are not discussing whether or not to do something but how to communicate about what needs to get done.

Follow these steps to improve cooperation and reduce arguments: 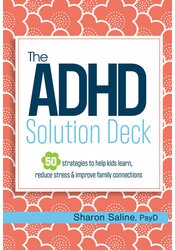 Help parents and kids stay calm, and work together...

The ADHD Solution Deck gives adults new insights into the minds and feelings of youth with ADHD, and offers practical, easy-to-use tools that foster more cooperation and reduce arguing.

The deck is divided into five themes:

YES! I want it
Want to motivate adults with ADHD? 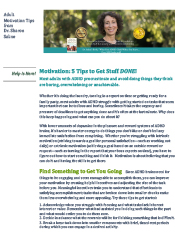 Most adults with ADHD procrastinate and avoid doing things they think are boring, overwhelming or unachievable.

That's why Dr. Sharon Saline wants to provide 5 Tips to Get Stuff DONE!

This PDF is free to print and download.
YES, Download Now!
Meet the Expert:
Sharon Saline, PsyD., a licensed clinical psychologist in private practice, is a top expert in how ADHD, learning disabilities and mental health issues affect children, teens and families. Dr. Saline has worked extensively with schools on mental health issues in the classroom, interpreting psychological evaluations and improving teacher/parent communication.

Learn more about her educational products, including upcoming live seminars, by clicking here.