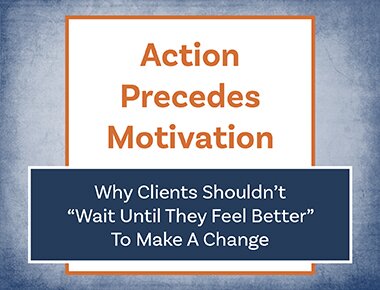 Action Precedes Motivation: Why Clients Shouldn’t “Wait Until They Feel Better” To Make A Change
Dr. Leslie Sokol shares how to help clients struggling with depression get up and moving again.

Leslie Sokol, Ph.D., a licensed psychologist, is an internationally recognized leader in the field of cognitive therapy with more than 35 years of experience in practice, teaching, and research. She was a past director of education and one of the principal instructors with the internationally acclaimed Beck Institute for Cognitive Behavioral Therapy in Philadelphia. She has taught cognitive therapy to professional and para professional groups, nationally and internationally, on such topics as: depression, anxiety, personality disorders, stress management, psychosis, substance abuse, and couples’ problems.

Dr. Sokol served as chairman of behavioral science for the Mercy Suburban Hospital Family Practice Training Program for over 20 years where she taught psychiatry and psycho social skills to family medicine residents and staff of the hospital. She continues to serve as staff psychologist for cardiac and physical rehabilitation departments. She also consults in numerous hospice and nursing home facilities. She maintains a private practice in the Philadelphia suburbs.

Dr. Sokol is a distinguished founding fellow of the Academy of Cognitive Therapy and a past president. She serves as chairman of its Credentialing Committee. She is a fellow of ABCT. In these roles, she was intricately involved in the provision and development of training protocols to insure competency in cognitive therapy training, and in the testing and utilization of tools to evaluate this competency.

To further her mission of spreading accurate knowledge of cognitive therapy worldwide, she was Representative at large for the IACP (International Association of Cognitive Psychotherapy). Dr. Sokol is on the Meet the Experts panel for Psychology Today and an invited member of the Psychology Today and Penguin speakers bureau.

Dr. Sokol has published in peer reviewed journals. She has been interviewed for articles in multiple national magazines, such as Redbook, Cosmopolitan, Women’s Health and Shape Magazine. She also has been interviewed for television WCAU NBC10 “10 Show” and Better TV, a nationally syndicated show. She is often interviewed by many national and international radio stations including such shows as WLAC_AM “He said she said”, “Martha Stuart Radio” “Sirius Satellite”, “I Hear America Talking” WRDC-FM and WLBS-FM, “Montel Williams Show” Air America Radio Network, and “Chefs Table” WHYY.

Non-financial: Leslie Sokol is a fellow of ABCT.